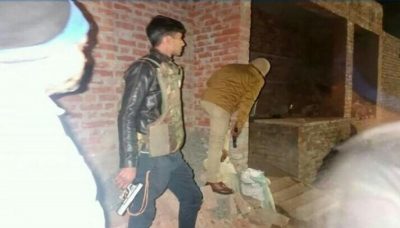 Farukkhabad (Uttar Pradesh), Jan 30 (IANS) In a shocking incident, a man with a criminal background invited about 20 children to celebrate his ‘birthday’ and then held them hostage.

The incident took place on Thursday evening in Mohamadabad area of Farukkhabad when Subhash Batham, accused in a criminal case, invited about 20 local children to his house for a party and then locked them in.

When some local people tried to get the door opened, he started firing from inside in which one person injured his leg. Batham even hurled a low intensity bomb from the window.

He allegedly shouted that he had been wrongly framed in a criminal case.

UP Director General of Police (DGP) O.P. Singh told reporters that the police were acting with caution to ensure the safety of the children locked inside.

“A special team of trained personnel is at the spot and we have kept NSG commandos on standby. Our priority is to ensure the safety of the children and rescue them at the earliest. It is a difficult situation and all senior police officers are at the spot. We want to rescue the children without any collateral damage. The local legislator, Nagendra Singh, is also trying to talk to the man,” he said.

The police have also called in Batham’s relatives and local village leaders.

A huge crowd has collected at the spot comprising mainly parents of the children who have been held hostage.

Tension prevailed in the area and a heavy deployment of forces has been made in the village.