New Delhi, Jan 30 (IANS) The firing at the Jamia Millia Islamia student march to Rajghat, here on Thursday, is the story of an assailant brandishing the firearm, opening the fire in public and the police remaining a moot spectator.

When Gopal, the assailant, brandished the gun and threatened to shoot at students, barely 10 metres away was standing Jamia SHO Upendra Singh along with dozens of police personnel. But they did nothing to prevent the firing, despite the students shouting hoarse for the police help.

And the police got into action — albeit in a slow motion.

Only one cop moved to get his hands on the assailant. They also didn’t remove the barricade or attempted to take the injured student to hospital — Shadab had to climb the barricade and run to seek medical attention.

DCP Chinmay Biswal said, “I was at the Holy Family Hospital gate when the firing took place. I don’t know what happened there. I just rushed there on hearing the gunshot.”

The firing took place when the march had just moved 60 metres, from Gate No. 7 towards the main road at the Fortis Hospital crossing. The students were raising slogans and singing.

Zaheer, a student, said, “When we saw him brandishing a pistol, we shouted for the police attention. But they didn’t intervene until the person opened fire on us.”

After the firing, the students formed a human chain around protestors and moved towards the police barricades. They didn’t even allow baton-wielding cops in plain clothes to come near.

“we know certain people want to create violence. But we will not allow that,” said a student protestor. 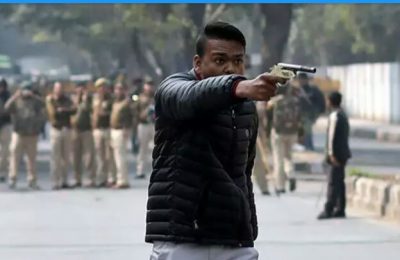 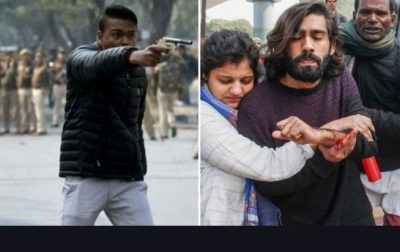