New Delhi, Feb 7 (IANS) A dramatic sequence of events disrupted Lok Sabha proceedings on Friday, leading to the House being adjourned for the day following a scuffle between BJP and Congress MPs over Rahul Gandhi’s ‘danda’ jibe against Prime Minister Narendra Modi.

After two brief adjournments — first around 11.50 a.m. and the second at 1 p.m. — the House was adjourned to meet a third time at 2 p.m. Speaker in the chair A. Raja then adjourned the House till Monday morning within minutes of its meeting as lawmakers from both sides again created pandemonium.

Earlier the House had to be adjourned minutes after it met at 1 p.m. following a scuffle between Congress and Bharatiya Janata Party MPs. Congress leader Manickam Tagore had tried to snatch a paper from Union Health Minister Harsh Vardhan when he was reading out a note condemning Rahul over his remark against Modi.

The Congress leader’s snatching attempt was followed by BJP MP Brij Bhushan Sharan Singh rushing towards Tagore to stop him, and then MPs from both treasury and opposition benches trooped near Lok Sabha Speaker Om Birla’s podium.

Following the ruckus, Om Birla adjourned the House till 1 p.m.

The uproar started soon after Gandhi asked a question from the Health Minister during question hour.

Mentioning the listed question number 89, Rahul inquired from the Health Minister Vardhan about establishment of medical colleges planned for his Wayanad constituency in Kerala under Phase-III of the centrally sponsored scheme for the ‘Establishment of New Medical Colleges’ attached with existing district or referral hospitals in aspirational districts.

Harsh Vardhan responded by saying that before he answered the question, he wanted to condemn the language Rahul had used against the Prime Minister. Vardhan, who made the remarks amid uproar, said he was surprised at Gandhi’s remarks as his father was a Prime Minister.

“In the worst of cases, BJP leaders have not made such personal remarks against Gandhi. The entire House must in unequivocal terms condemn his language against the Prime Minister,” said Harsh Vardhan.

Gandhi had said that the youth of India will “beat him (Modi) up with a stick” given the rising unemployment in the country.

While addressing a rally in poll-bound Delhi on Wednesday, Gandhi had said that Modi will “not be able to step out of his house in six months from now. The youth of India will beat him with sticks to make him understand that without employment, the country can never progress.”

The Prime Minister on Thursday hit back at Gandhi over his ‘danda’ jibe, saying he would be “sufficiently prepared given his pursuance of yoga in the last 20 years”. He said his back has become ‘danda-proof’, and that he would further strengthen it with more “surya namaskars”.

Replying to a debate on Motion of Thanks to the President’s address, Modi on Thursday said: “I heard a Congress leader saying that the youth will hit Modi with sticks in six months. I have decided that I will increase my frequency of ‘surya namaskar’ so that my back becomes so strong that it can bear with the hits. 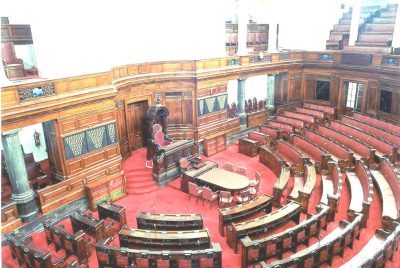