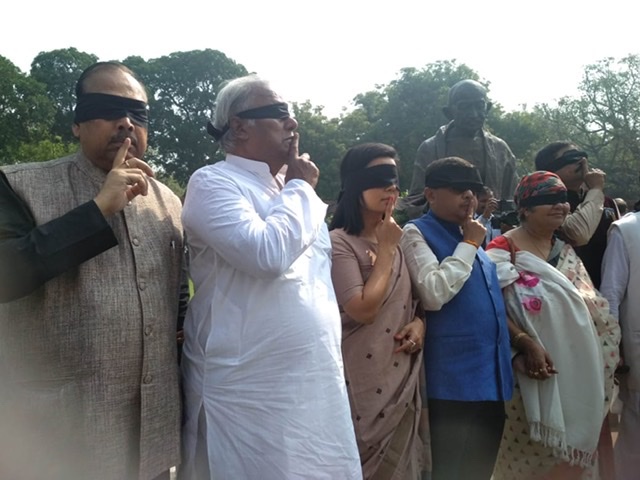 New Delhi: The Trinamool Congress (TMC) MPs protested on Monday in front of the Gandhi statue in Parliament premises over the violence in Delhi.

Speaking to IANS, TMC Rajya Sabha MP S.S. Roy said it was a symbolic protest against the Centre over its failure to prevent the violence.

“My black band indicates that this government has become blind. They have also become deaf and dumb. Their leaders ask to open fire and give ultimatum to Delhi that if the blockade will not be cleared they will take law in their own hands. Exactly that has happened (during Delhi riots).

“People broke the law and opened fire in which many people were killed in the capital. Therefore it is our symbolic protest against the government,” said Roy.

The capital witnessed deadliest mayhem in decades on February 23 when anti and pro-CAA protests turned violent in northeast parts of Delhi. Over 40 people died and more than 200 were injured in the violence.

Opposition parties are holding the Centre responsible for the violence as many BJP leaders allegedly provoked people through their controversial statements.