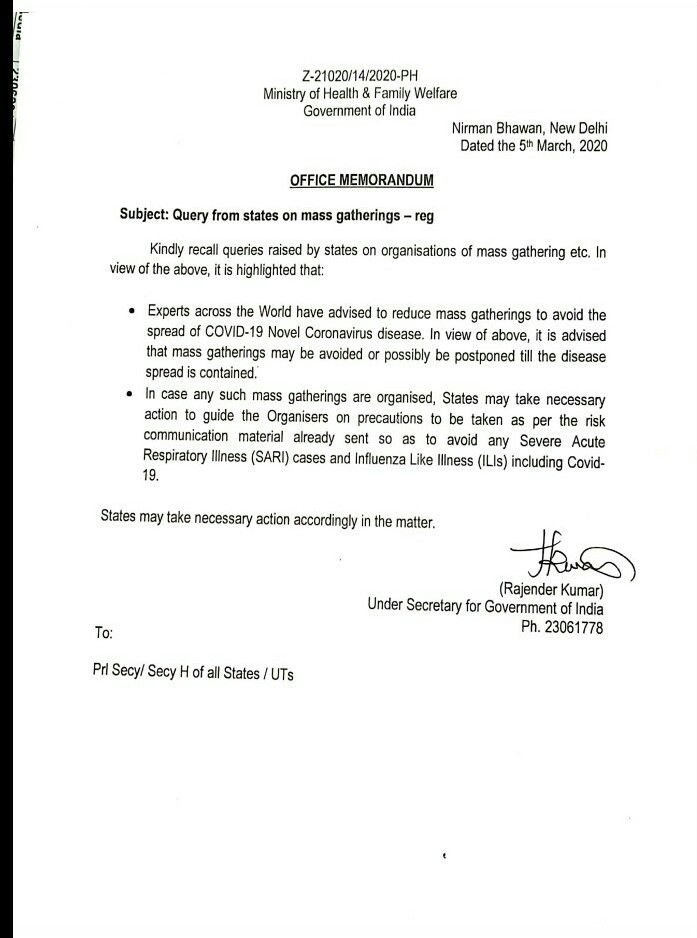 New Delhi: The Ministry of Health and Family Welfare has asked the states and union territories to reduce mass gatherings in order to avoid spread of novel coronavirus.

In a memorandum, released by the Health Ministry in response to query from states, it said that “experts across the world have advised to reduce mass gatherings to avoid the spread of COVID-19 novel coronavirus disease. In this view, it is advised that mass gatherings may be avoided or possibly be postponed till the disease spread is contained.”

The memorandum was released on Thursday.

The ministry further stated that in case any such mass gatherings were organised, “the states may take necessary action to guide the organisers on precautions to be taken as per the risk communication material already sent so as to avoid any Severe Acute Respiratory Illness (SARI) cases and influenza like illness (ILIs) including COVID-19”.

At least 31 confirmed cases have been reported so far from India, of which the previous three patients from Kerala have recovered. The patients include Italians and Indian nationals.

The first COVID-19 outbreak was reported in China’s Wuhan City in December last year. Since then it has spread to more than 60 countries including Italy, Iran and South Korea.

The flu like disease has symptoms of pneumonia and shortness of breath.