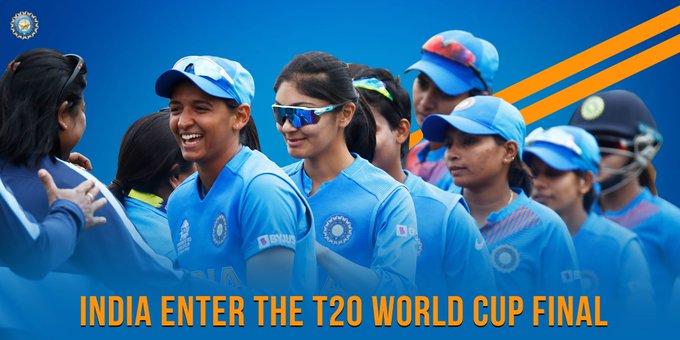 Melbourne: The undefeated and unafraid Indian team will take on four-time champion and home favourites Australia in the much-anticipated final of the ongoing Women’s T20 World Cup at Melbourne Cricket Ground on Sunday.

Touted as the women cricket’s biggest game to be played, the grand stadium is slated to hold more than 75,000 fans with #FilltheMCG as the marquee trend among social media platforms and famous pop singer Katy Perry electrifying the vigour of fans.

India progressed as the top-ranked team in Group A following a semi-final washout against England and their unbeaten run in this year’s tournament makes the finale tough to call.

On the other hand, Australia edged out South Africa in a tight semi-final but when it comes to history in the T20 experience, the two battling it out couldn’t be further apart.

For the hosts, it will be their sixth successive appearance in the T20 World Cup final, having made the showpiece in every edition since 2010. And this time, they’re bidding for a record-extending fifth T20 World Cup title.

In the overall head to head, Australia have a distinct advantage over the 4th ranked India. Both have taken on each other in 31 matches in T20I format in which Australia have emerged victorious on 26 occasions.

However, the good news for India commenced with the opening day of T20 World Cup 2020 edition with a straight win over the Aussies by 17 runs and remained unbeaten since then for the rest three matches and one against England being abandoned.

For India, they have never previously made it to the Women’s T20 World Cup final, and thus would be looking to become just the fourth side – after Australia, England and West Indies – to be T20 world champions.

Toss will play a crucial role in the summit clash. If India win the toss, they would back themselves to set a stiff target against the dominating Aussies and defend it. The young Indian batters – comprising of Shafali Verma and Jemimah Rodrigues — are in great nick but seniors Harmanpreet Kaur and Smriti Mandhana will have to fire big as India chase their maiden ICC title.

Verma has lit up the tournament with her performances at the top of the order, having already hit 161 runs in her four innings.

Australia’s batters have also caught the eye, with Beth Mooney and Alyssa Healy scoring 341 runs between them at the top of the order.

The two leading wicket takers in the tournament will also be in show with Megan Schutt and Poonam Yadav both having nine to their name.

Both the star Indian batters haven’t been able to fire and that’s why they would want to score big to make Harmanpreet’s 31st birthday even more memorable.

Harmanpreet will be the first woman to captain India in a T20 World Cup final, while Meg Lanning could become the third Australian to lift a global trophy on home soil after Lyn Larsen and Michael Clarke.

When it comes to Australia, their bowling is very precise. Whilst Elysse Perry is out, Megan Schutt — leading the table with Poonam on 9 wickets — has the tenacity to rattle the Indian top-order. Jess Jonassen, who took two major wickets of skipper Harmanpreet and Smriti in the opening match of World Cup, will pose additional threat.

The final presents an opportunity to set a new record for attendance at a women’s sporting fixture, bidding to beat the 90,185 set at the 1999 FIFA Women’s World Cup final in the USA.