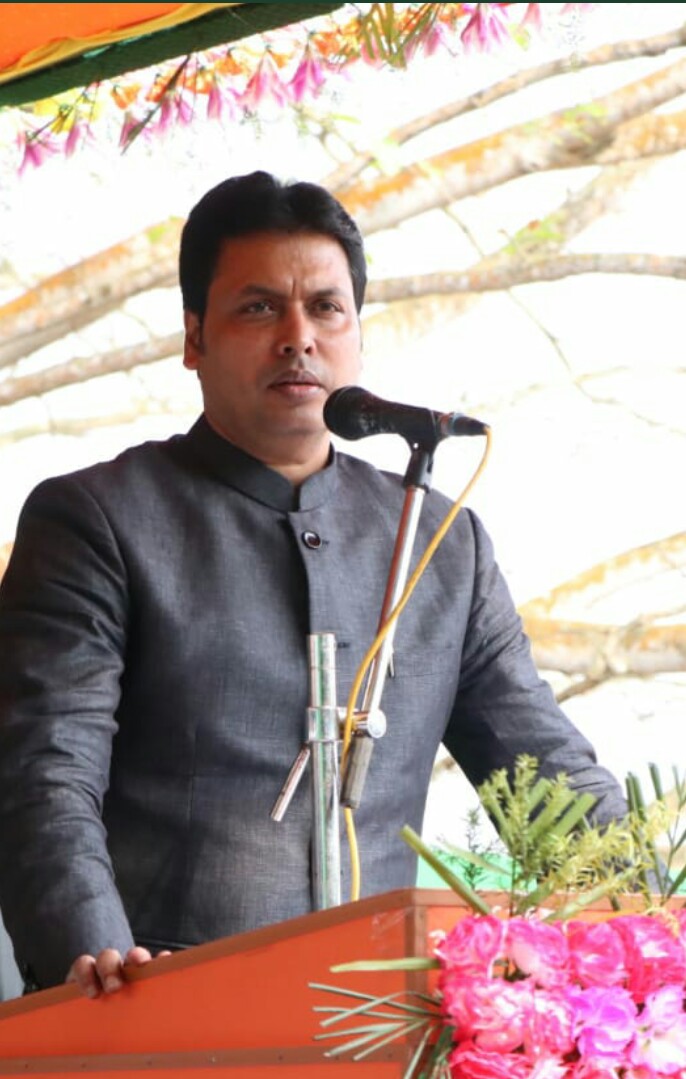 Despite the erstwhile Left government’s “all-round non-performance”, Tripura under his government would become a model state in three years since the state had gained leading position on many counts in the last two years, the Chief Minister told IANS in an interview as his government completed two years on Monday.

To further improve connectivity between land-locked Tripura and the rest of the world, ambitious projects of railways, roadways, waterways, and airways are under implementation, Deb added.

After completion of the ongoing such projects either by year-end or early next year, all northeastern states would benefit in terms of easier connectivity.

The 49-year-old Deb, the 11th Chief Minister of Tripura, claimed that during the Left regime ‘dal tantra’ (party-run system) dominated in all spheres, while ‘ganatantra’ (democracy) was non-existent.

“The BJP-led government had to cope with Rs 12,902-crore loan burden left by the previous Marxist government. We had to pay Rs 5.56 crore per day to repay the loan along with interest,” he added.

The BJP in alliance with tribal-based Indigenous People’s Front of Tripura (IPFT) had won the Assembly polls two years ago, breaking the 25-year uninterrupted rule of the Left Front led by Communist Party of India-Marxist.

Highlighting his government’s two-year performance, Deb said that in 2017-18, Tripura’s per capita income was Rs 1.05 lakh. “Because of BJP regime’s good governance, Tripura rose to 16th position from previous 21st position among 37 states and union territories in the country.”

“The BJP government has taken several steps to boost the state’s economy by mobilising available resources. The total tax collection has increased from Rs 1,915 crore in 2017-18 fiscal to Rs 2,338 crore in the current fiscal (2019-20), a net increase of 21.82 per cent. National GST (Goods and Services Tax) collection is 3.7 per cent, but in Tripura this is over 10 per cent.”

Deb, who pledged to make Tripura drugs-free, said that to save the young and future generations from the menace, his government after assuming office on March9, 2018 launched a war on drug trade, cultivation and smuggling.

“As Tripura has taken a lead among northeastern states in curbing drug menace, Union Home Minister Amit Shah has asked governments in the region to make northeast India a drugs-free are by 2022.”

Deb, who holds the Home portfolio, said that the conviction rate in Tripura has increased to 47 per cent from 29 per cent and organised crime against women reduced by 10 per cent in two years.

“Crime against women in Tripura is 15 per cent less than the national average. To empower the women, 10 per cent posts in police department have been reserved for the women.”

Deb said that the Tripura government had introduced 21 new schemes and taken many steps in two years to improve the quality of education, including introduction of NCERT (National Council of Educational Research and Training) curriculum.

The Chief Minister assured that his government would take steps to protect the jobs of 10,323 Tripura government teachers recruited during the previous government’s tenure but now facing termination due to High Court and Supreme Court verdicts.

Regarding the expansion of eight-member Tripura council of ministers, Deb said that it would be done in due course of time.