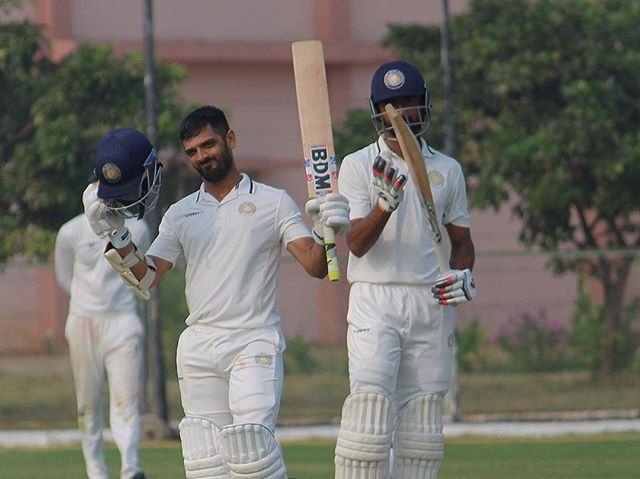 Rajkot : Arpit Vasavada scored a second successive hundred while Cheteshwar Pujara slammed a patient half-century to help Saurashtra reach 384/8 at stumps on Day 2 of the Ranji Trophy final against Bengal here on Tuesday.

Overnight batsman Vasavada scored 106 off 287 deliveries (4×11) and shared a 142-run partnership with India Test specialist Pujara, who recovered from fever which forced him to retire hurt on the first day. 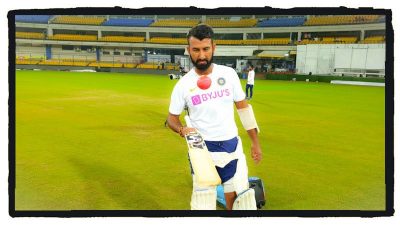 Bengal bowlers made a comeback in the final session to take three wickets, but the advantage lay with the home side at the end of the day’s play.

Resuming at 206/5, Saurashtra were happy to see Pujara walk out to bat, shaking off health issues. The ace batter, joining his state side after India’s tour of New Zealand, then took his time in the middle to get adjusted with the bounce of the pitch.

At the other end, the impressive Vasavada too made the Bengal bowlers toil as both the opening sessions belonged to the home team. Vasavada, who had notched up 139 in the semifinal here against Gujarat, got to his fifty with a four off off-spinner Arnab Nandi, driving him past mid-on. Pujara broke the shackles in the following over by stepping out to cover-drive left-arm spinner Shahbaz Ahmed to the fence.

Southpaw Vasavada reached three figures 20 minutes before the Tea break as he cut one off Nandi through cover. Pujara got to his fifty off 191 balls at the stroke of Tea.

On Day 2, the hosts managed 178 runs in 79.1 overs for the loss of three wickets. Pacer Mukesh Kumar dismissed Pujara and Prerak Mankad (0) in the final session but it was too little too late as Saurashra were already in the driver’s seat.

Bengal took their first wicket of the day in the fifth over after Tea with Wriddhiman Saha effecting a sharp stumping off Shahbaz Ahmed to send back Vasavada.

Ahmedabad cop Gujarat’s first corona warrior to die
24 migrants killed, 20 injured in UP accident
Telangana’s 40% Covid patients in 21-40 age group
Hydroxychloroquine may not be effective against COVID-19: Chinese study
Major losses for Kashmir’s apple industry during lockdown
Half pint of beer a day can lead to longer life
Amid row, Assam not to use PPE kits imported from China
Playing cricket in empty stadium like marriage without bride: Akhtar
COVID-19 could kill 190,000 in Africa in a year: WHO
‘Amphan’ weakens into Very Severe Cyclone Storm
Newer Post
AIFF postpones final round of Santosh Trophy
Older Post
তরুন আইনজীবীর মৃত্যুতে ত্রিপুরা হাইকোর্টে জনস্বার্থ মামলা