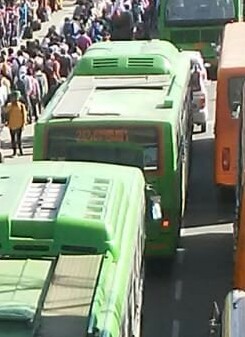 ArrayRanchi:The Jharkhand government has issued a showcause notice to Ranchi Deputy Commissioner Mahimapat Rey for violating the lockdown on the directive of a state minister. It was alleged that the DC had allowed 11 buses to ply during lockdown on March 29.

Jharkhand Rural Development Minister Alamgir Alam had asked Ranchi DC to allow 11 buses to ply from Ranchi to Koderma, Sahebganj and other districts of the state to ferry labourers.

The minister, at the request of a person of his constituency, allegedly asked Ranchi DC to issue passes for 11 buses to ply. The passes were issued for inter district services of the buses. The passes were issued despite the fact the central government had issued directive for strict lockdown and asked to seal the border of the districts.

The state government in its notice has sought the reason to violate the lockdown.

The lockdown impact was also visible on devotees during Chati Chatth festival. Large number of people observed the Chatth festivals on roofs of their houses as very few turned up at ponds early Tuesday morning to perform Chatth puja.
(IANS)