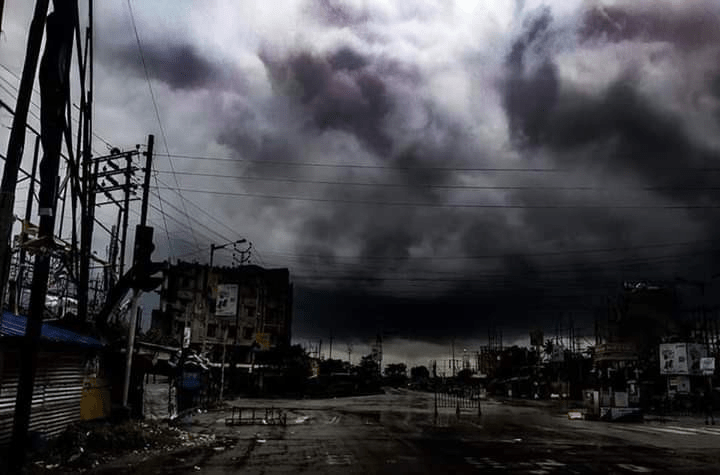 Kolkata: Scenes of large uprooted trees, damaged houses and flown off roofs were just the beginning when Super Cyclone Amphan made its appearance less that 24 hours back, as it pummelled through the night over Kolkata and large parts of West Bengal it left behind a trail of deaths as at least 12 people were killed.

Scenes from Kolkata airport showed the damage left behind as large airliners stood in a river of water with facilities damaged. This is the most devastating cyclone that struck the city in centuries, some wondered since the 1737 when the Calcutta cyclone killed many, while others said nothing like this have they crossed in the past few decades. Houses were flattened, massive number of trees uprooted as many feared damage to iconic structures in the city as well, and reports still pour in 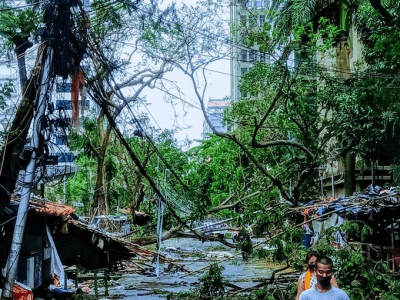 Amitav Ghosh, the renowned author, who along with many others tweeted concern for their old parents stuck alone in the city amid the covid-induced lockdown. Ghosh said: “The terror they have been through is evident in their voices,” as he was finally able to touch base with his folks.

With landlines severed and no electricity for hours as the people managed through the raging storm, many tweeted photos of destruction to property, waterlogging right inside their kitchen as they paddled through pools of water. A taxi stand in Maniktala was completely submerged. End of Days-kind of scenes were witnessed as wind at 185 kmph blew through the railings of the iconic Howrah Bridge.

The severe cyclonic storm on Thursday weakened and lay centered over Bangladesh about 270 north-northeastwards of Kolkata with a wind speed of 27 kmph. 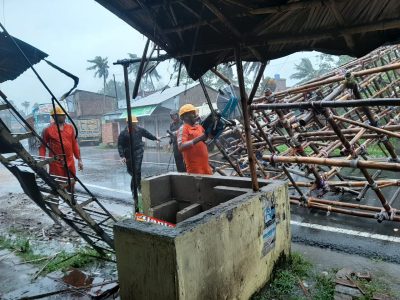 The super cyclonic storm Amphan (pronounced as UM-PUN) moved “north-northeastwards with a speed of 27 kmph during the past six hours, further weakened into a cyclonic storm and lay centered at 5.30 a.m. on Thursday over Bangladesh near latitude 24.7eN and Longitude 89.5eE about 270 km north-northeast of Kolkata, 150 km south of Dhubri and 110 km south-southeast of Rangpur (Bangladesh)”, the India Meteorological Department (IMD) said.

It said that the Cyclone is now centred over Bangladesh and it will have no adverse impact over West Bengal and Odisha — a good sign as it cut a swathe through northern Odisha before bearing down on West Bengal where it claimed 10-12 lives, flattened houses and cast aside trees and electricity poles like matchsticks in six-and-a-half hours of monstrous fury that left Kolkata and most of south Bengal pulverised.

While Odisha was spared the worst of Amphan, the Sunderbans region and six south Bengal districts felt the full impact of winds gusting at 155-165 kmph along with torrential rain after the cyclone made landfall near Sagar Island around 2.30 p.m. on Wednesday and entered Kolkata, about a 100 km north, around 5 p.m.

West Bengal Chief Minister Mamata Banerjee on Wednesday said, “We are not getting proper reports as the connections have been completely cut off due to the storm. But the total losses are likely to amount to thousands of crores. It will take at least 3-4 days to do an initial assessment of the losses. Many bridges and kutcha houses have been completely ravaged.”

Heavy rains and huge gush of wind storms damaged the roofs of several buildings and uprooted a massive number of trees across Kolkata and its adjoining Howrah district. Among the dead, were a girl in Howrah who died after a wall collapsed on her at Shalimar locality. In North 24 Parganas districts, a 56-year-old woman in Minakhan and another youth in Basirhat were killed by uprooted trees. In Kolkata, a mother and her son died at the Regent Park area in south Kolkata.

In the first few hours Amphan already destroyed over 5,000 houses in Minakhan, Haroa, Basirhat Hingalgunj and Hasnabad areas of North 24 Parganas district. Most of the areas in Howrah and North 24 Parganas faced massive power cuts due to heavy rainfall. Roofs of several houses also collapsed as a result of the strong winds during the cyclonic spell. There have been damages inside the state secretariat building Nabanna as well.

Two teams of NDRF have already started road clearance work at Shyampur Block in Howrah district, sources said. “We will ask the Centre to look at the extent of damages with a humane face. As per our initial estimates, 10-12 people have died. We feel the loss of lives could even surpass that caused by the Covid-19 pandemic,” Banerjee said.

Amphan, a Thai name means sky, is the most severe storm in the Bay of Bengal since the Odisha super cyclone of 1999. (IANS)

‘Left’ ideology scares them the most ! 0

Uproar over naming new RGCB campus in Kerala after Golwalkar 0