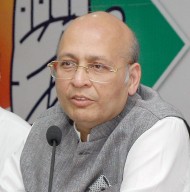 New Delhi: The Congress on Friday slammed the government over interstate movement of migrant labourers, saying it’s a cruel joke that the Union government has asked the migrants to move by buses though trains would have been easier to move them to their native places.

Congress spokesperson Abhishek Manu Singhvi said that only two days ago, a “tughlaqi farmaan” was issued by the Ministry of Home Affairs “which is very quaint and funny”. “It is as if it was issued by an ignorant and uncaring person.”

The party said the MHA order said that “you are now allowed to return to your state, but you can do it only by buses, the receiving and sending states must have nodal officers and they must consult each other before you reach. There must be a screening at the receiving point.”

The Congress said it’s a cruel joke that the migrants are distressed and told to travel by buses. “How can a large number of buses be arranged to ferry such a huge number of migrants?”

“The Central government has abandoned mercilessly, and without second thoughts, an entire category of people known as migrant labour. Let me remind you that migrant labour is most vulnerable and the weakest section of our informal sector,” said Singhvi.

He said every state has migrants, even Assam has 1.5 lakh people who want to return to the state. Uttar Pradesh and Bihar have around 50 lakh people living in other states, he added.

The Congress said the government should allow trains to start from designated points to send the migrants back home.