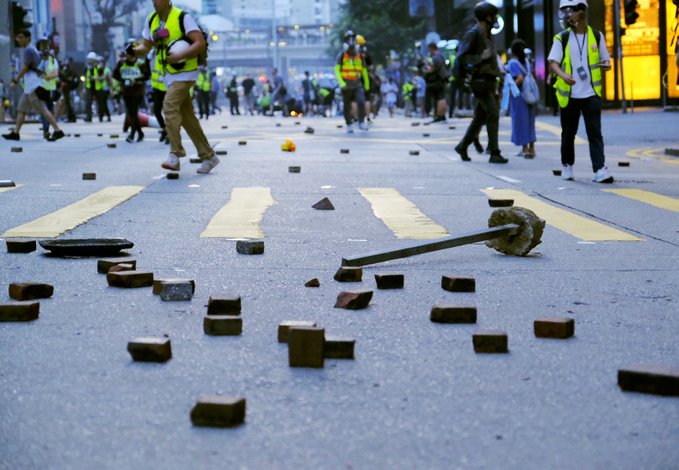 Hong Kong: Hong Kong police fired multiple rounds of tear gas on Sunday as hundreds of people took to the streets to protest China’s planned national security law for the city, denouncing the proposed legislation as a threat to civil liberties and the end of the “one country, two systems” principle.

Earlier in the day, the police urged citizens on its Facebook page not to take part in any unauthorised assemblies, saying it had mobilised enough officers to take decisive action and make arrests, reports the South China Morning Post (SCMP).

Sunday’s protest took place two days after a resolution to “prevent, frustrate and punish” threats to national security in Hong Kong was presented to China’s legislature, the National People’s Congress.

The draft legislation would outlaw acts of secession, subversion and terrorism.

The resolution is expected to be passed on May 28, authorising the NPC Standing Committee to craft a tailor-made national security law and impose it on Hong Kong, bypassing the city’s legislature.

The new law would require the Hong Kong government to set up new institutions to safeguard sovereignty and allow mainland agencies to operate in the city as needed, sparking concerns about mainland agents making arbitrary arrests.

Hong Kong Chief Executive Carrie Lam welcomed the law, while assuring residents and investors that the law would protect, rather than hurt, their rights, said the SCMP report.

She maintained that it would not undermine the governing principle of “one country, two systems” for Hong Kong, its high degree of autonomy or the cherished principle of “Hong Kong people administering Hong Kong”.

Hong Kong’s opposition politicians have said the plan to introduce the law by fiat is tantamount to adopting a “one country, one system” model in the city, abandoning the “one country, two systems” principle that guarantees the city a high degree of autonomy.

The bill, which city leader Carrie Lam has called a top priority, provides for jail terms of up to three years.

The Legislative Council will debate the bill on Wednesday. (IANS)