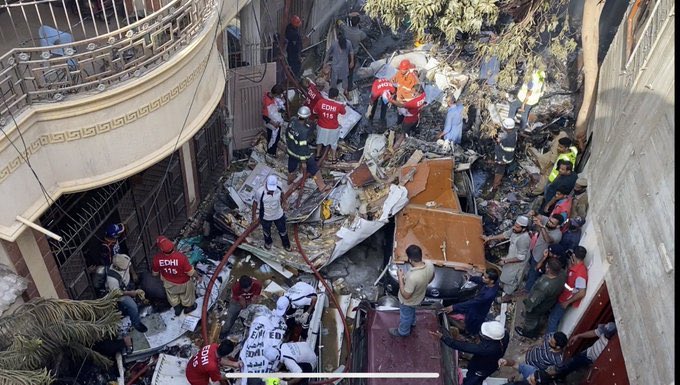 Karachi: An inquiry has been launched into the Pakistan International Airlines (PIA) plane crash at a residential area in Karachi that left 97 people dead, the country’s aviation minister said.

Apart from the investigation board formed by the government, a team from the aircraft’s makers will also visit the crash site for investigation, and the plane’s black box will be sent for decoding to further help the probe, Aviation Minister Ghulam Sarwar Khan told a media briefing on Saturday.

He added that the report will be made public within three months after which stern action will be taken against those found guilty, reports Xinhua news agency.

He also announced a compensation of 1 million PKR ($6,227) each for the families of the 97 deceased passengers.

Talking to Xinhua, Meeran Yousuf, media coordinator of the health minister of Sindh province, said that all the 97 people were the passengers and 21 of them have been identified and their remains were handed over to relatives while identification of the rest was underway.

“We have requested the families of the deceased people to cooperate with us for DNA test to identify the remaining bodies, and currently samples are being taken for the test. It will take 21 days to identify the bodies through the test after which they will be handed over to the families,” she added.

She said the plane fell in a street, and 17 houses were damaged, adding that the families of the affected houses have been shifted to various state-owned accommodations, and they will be compensated later.

Two people survived the crash including an engineer who got burn injuries, and the president of the Bank of Punjab who got multiple fractures but the condition of the two is stable, she said.

“The bank’s president was sitting close to the emergency exit, and he controlled his nerves to quickly open the exit door after the plane crashed while the engineer was sitting on the back seat and when he saw the door opening, he restored his conscious and quickly jumped off the burning plane. Both of them were later shifted to hospital,” Yousuf added.

According to Director Management of Operations PIA Jawad Haider, the plane was not fully loaded due to COVID-19 safety measures.

The PIA flight PK-8303 with 91 passengers and eight crew members onboard took off from the Allama Iqbal International Airport in the eastern city of Lahore at 1.08 p.m. and crashed at 2.45 p.m. local time on Friday, PIA spokesperson Abdullah Hafeez said.

The Pakistani government has suspended domestic flight operations in March this year due to its measures against the COVID-19 spread.

It resumed the domestic flight operations on May 16. (IANS)