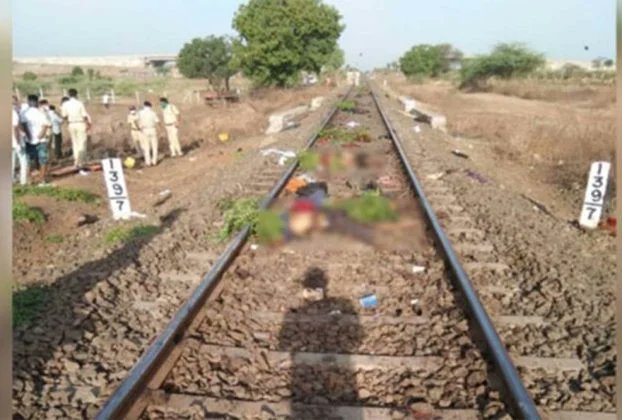 Aurangabad (Maharashtra)/New Delhi: At least 16 migrant labourers have died after a goods train ran over a group of workers asleep on the railway tracks early on Friday in Maharashtra’s Aurangabad. The home-bound exhausted lot were run over between Jalna and Aurangabad, officials said.

A Railway Ministry official told IANS: “At least 14 people died on the spot and two were injured in the incident. The injured persons admitted in the hospital later succumbed to their injuries.”

The migrant workers were trying to return to their rural homes in Madhya Pradesh.

The official said that one person, who received minor injuries is being treated at Auranagabad Civil hospital. A senior railway official confirmed that the migrant group was run over by the goods train running in the Nanded Division of South Central Railway.

The incident happened around 5.22 a.m. when the migrants, who were on their way back to their homes fell asleep on the railway tracks.

Images from the scene of the accident showed the tracks strewn with footwear, food and other personal belongings of the workers. 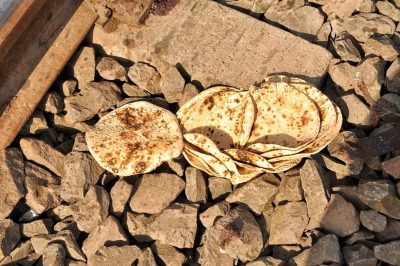 According to the railway officials, the group of the migrants were hit by an empty petroleum tanker train, which was proceeding from Cherlapalli in Telangana to Paniwadi, near Manmad in Maharashtra.

“After passing Badnapur station, the locopilot saw some people on the tracks and tried to control it and sounded the horn also, but by the time he could do, it was too late,” South Central spokesperson Ch. Rakesh told IANS.

“An enquiry has been ordered by the Commissioner, Railway Safety (South Central Circle),” he added.

A senior railway ministry official in Delhi said that those run over by train are labourers and residents of Madhya Pradesh’s Umarya and Shahdol and worked in SRG Company in Maharashtra’s Jalna.

He said, as per the statements of the survivors, the group had left Jalna on Thursday at 7 p.m. on foot initially on road upto Badnapore and later on the track towards Aurangabad.

“After walking for about 36 km, they became tired and sat on the track to take some rest and gradually fell asleep,” he said, adding that 14 people sat on the track, two members adjacent to the track and three members away from track.

He said that senior officials of the Nanded division and the Government Rail Police (GRP) and local police had rushed to the accident site.

A senior railway ministry official in when asked about the fault, he said, “No one is allowed to sleep or sit on the railway tracks. It is trespassing.” He said, the Railways keeps on making public awareness to not trespass railway properties.

Former Congress chief Rahul Gandhi slammed the Central government saying it should be ashamed for the way in which migrants are being treated.

“Saddened beyond words to learn about the loss of lives in the railway track accident near Aurangabad in Maharashtra. My thoughts and prayers are with the bereaved families. Wishing speedy recovery to the injured,” Kovind said in a tweet.

Naidu, in a tweet, said: “Deeply saddened to learn about the loss of lives in a train mishap in Aurangabad, Maharashtra. My heartfelt condolences to bereaved families.”

Modi also condoled the deaths on Twitter and said: “Extremely anguished by the loss of lives due to the rail accident in Aurangabad, Maharashtra. Have spoken to Railway Minister Piyush Goyal and he is closely monitoring the situation. All possible assistance required is being provided.”

The Railway Minister also tweeted: “Today, received a saddening news of labourers sleeping on railway tracks run over by a goods train at 5.22 a.m. in Nanded division between Karnad and Badnapur railway station. Relief work is on and an enquiry has been ordered. I pray for the those who lost their lives.”

“I am shocked at the news of the death of the labourers and brothers after being run over by a goods train. We should be ashamed of the treatment being given to our nation builders. My condolences to the families of those killed and pray for the early recovery of the injured,” Rahul Gandhi tweeted, slamming the Central government.

Both Madhya Pradesh Chief Minister Shivraj Singh Chouhan, and Maharashtra Chief Minister Uddhav Thackeray have announced ex-gratia of Rs 5 lakh each for the kin of the deceased.

Amid the nationwide lockdown that has entered its third phase since coming into effect from March 24, thousands of migrant workers stranded in several cities have been on an unending toil to return to their native places on foot.

The interstate bus service, passenger, mail and express train services have been suspended since March 24.

The Railways has started running Shramik Special trains to transport the stranded migrants to their native places since May 1.

Till Thursday, Railways has run 201 Shramik Special trains and transported over 1.8 lakh migrant workers to their native places.