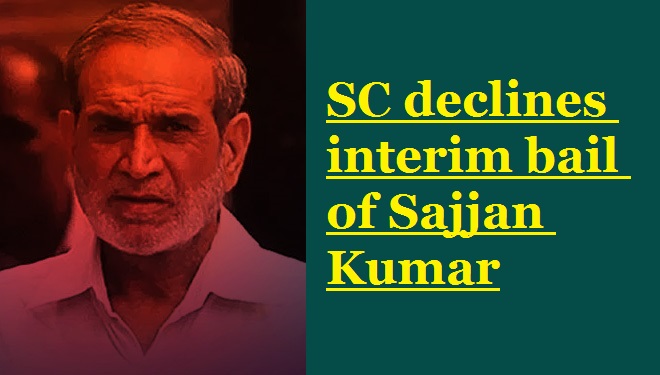 New Delhi: The Supreme Court on Wednesday declined to entertain an interim bail plea filed on medical grounds by former senior Congress leader Sajjan Kumar, who is serving life imprisonment for his involvment in the 1984 anti-Sikh riot case.

A bench headed by Chief Justice S.A. Bobde and comprising Justices Indu Malhotra and Hrishikesh Roy, after examining Kumar’s medical report, said “you do not need any medical hospitalization”.

Earlier, the apex court had directed Kumar to appear before an AIIMS board, which would determine whether he needs to be hospitalized.

Senior advocate Vikas Singh, representing Kumar, contended before the bench his client is more than 70-years-old and suffering from diabetes and other diseases. “My client has health issues….”

Singh added that he could not be produced again before AIIMS due to Covid-19 crisis. “Tomorrow, if my client dies, his life sentence will automatically get converted into the death sentence,” contended Singh.

The Chief Justice said: “Do not say that.” The bench observed it is inclined to keep the matter pending, as the March 7 AIIMS report said “you do not need hospitalization”.

Solicitor General Tushar Mehta, representing the CBI, said: “It is a case of genocide and he was leading a mob.” Senior advocate Dushyant Dave, appearing for some riot victims, also opposed Kumar’s bail plea.

Kumar and Balwan Khokhar, who has also sought parole in the case, are serving life imprisonment in Tihar jail in the riot case after the Delhi High Court convicted them in December 2018.

Khokhar’s life sentence was upheld by the Delhi High Court in 2018, while it had reversed Kumar’s acquittal by the trial court in 2013.

They were convicted in a case related to the killings of five Sikhs in the Raj Nagar Part-I area, Palam Colony, in southwest Delhi on November 1-2, 1984, and burning down of a Gurdwara in Raj Nagar Part-II. Riots had broken out after assassination of then Prime Minister Indira Gandhi on October 31, 1984 by her two Sikh bodyguards. (IANS)