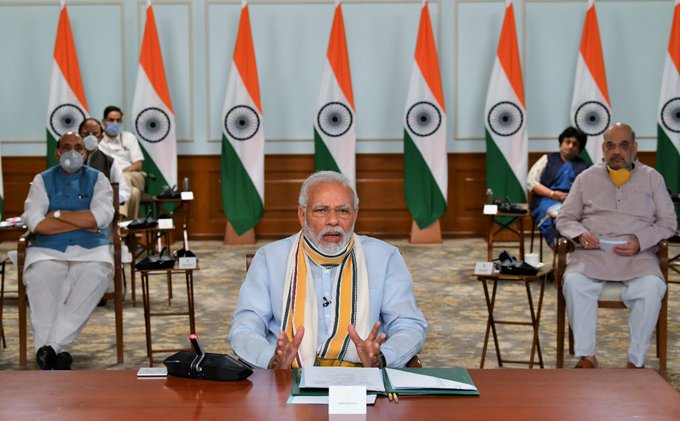 New Delhi: At the Prime Minister’s fifth video conference with Chief Ministers of different states and Union Territories, at least five states advocated an extension of the current lockdown. However they were outnumbered by many states and UTs who asked for more relaxation in terms of opening up the economy while keeping certain restrictions.

Maharashtra Chief Minister Uddhav Thackeray vociferously made a pitch for the extension of the current lockdown, stating lifting it will grossly impact the state’s efforts to contain the virus. Maharashtra has been the worst-hit with more than 22,000 cases of Covid-19.

West Bengal Chief Minister Mamata Banerjee, who was believed to be in a fiery mood, also pitched for the extension. Punjab too is inclined towards an extension given the spike in numbers after many migrants from Maharashtra reached back home. Earlier, in an exclusive interview to IANS, Punjab Chief Minister, Capt Amarinder Singh blamed Maharashtra government’s “negligence” for Punjab’s “sufferings”.

Amarinder Singh also sought a well-crafted exit policy and economic empowerment. He urged PM Modi that zoning should be left to states. He also sought fiscal aid for states to meet at least 33 per cent of committed liabilities.

There were at least two Chief Ministers – of Telanagana and Tamil Nadu – who raised their objections to the resumption of railway services. Both Chief Ministers K. Chandrasekhar Rao and E. Palaniswami claimed it will undo all the gains of lockdown and the “time” for resumption of railway services hasn’t come, yet. Last night, the Centre announced that from May 12, it will slowly restart train services.

However, there were others who demanded more relaxations. One of them being Andhra Pradesh Chief Minister Y.S. Jagan Mohan Reddy. He not only wanted relaxation of rules but demanded resumption of inter-state transport service. However, he stated that Andhra Pradesh requires Rs 16,000 crore immediately to fight Covid-19.

Delhi Chief Minister Arvind Kejriwal is believed to have told the PM to ensure economic activities across the national capital save the containment zones. Interestingly, the entire Delhi comes under red zone.

This was Prime Minister Narendra Modi’s fifth such interaction. Sources said the focus of the meeting was on further increasing economic activities and on tackling the pandemic in containment zones as the lockdown 3.0 is to end on May 17.

The lockdown, enforced on March 25, was originally supposed to end on April 14. It was then extended to May 3, and then again to May 17. (IANS)