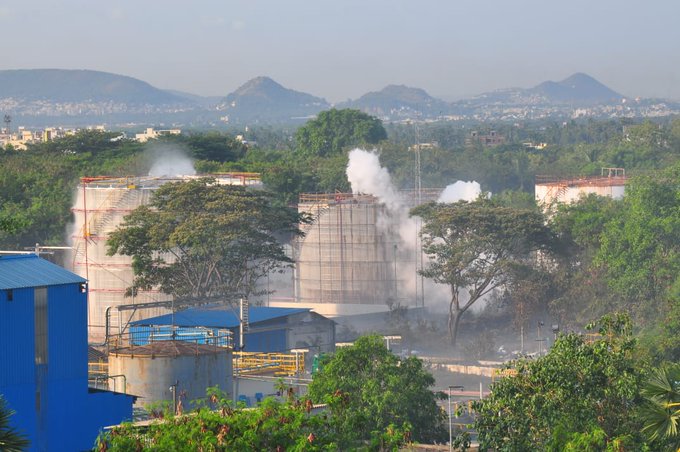 Visakhapatnam: Two days after gas leakage from LG Polymers claimed 12 lives and affected hundreds of others, people of Venkatapuram village staged a protest on Saturday with three dead bodies at the chemical plant, demanding justice.

Tension prevailed at the plant as the villagers staged a sit-in at the plant’s gate with three dead bodies when Director General of Police Gautam Sawang was visiting the plant.

The DGP, Police Commissioner R.K. Meena and other officials were inside the plant when the protesters blocked the main gate, raising slogans demanding the plant’s closure and re-location.

Some protesters barged into the plant premises. The police had a tough time in clearing them and providing safe passage to the top officials.

Some local police officials were trying to pacify the protesters and persuade them to end the sit-in agitation.

Earlier, residents of Gopalapuram, the worst affected among five villages surrounding the plant, staged a sit-in, raising slogans against the company. Police detained and removed them from there.

Several other villagers including women also reached there and demanded that the government come to their rescue by shutting down the plant.

They voiced apprehensions over the long-term impact of Styrene leaked from the plant on the environment and on their health. “The government should immediately shut down the plant and shift it to some other place,” demanded a protester.

The villagers also demanded that a high-power committee constituted by the government to probe the gas leak should hold talks with the people of the five villages surrounding the plant and not the company’s management.

They also wanted the authorities to improve the oxygen level in the villages to ensure their early return. They said the government should come out with the details about the level of Styrene in the air and whether it is safe for their return to the villages.

“The gas leak has badly affected the health of many of us. There could be long-term impact. The government should conduct regular health camps to check our health status,” demanded another villager.

Many protesters demanded strong action against the company management for not following the safety norms. They said had the siren blared from the plant many lives could have been saved.

Styrene had leaked from the plant around 3.45 a.m. on Thursday. The incident claimed 12 lives while over 400 were taken ill and had to be hospitalized.

District officials said 10,000 people from five villages were shifted to relief camps. They have been asked to stay in the camps till they are declared safe for return to the villages.