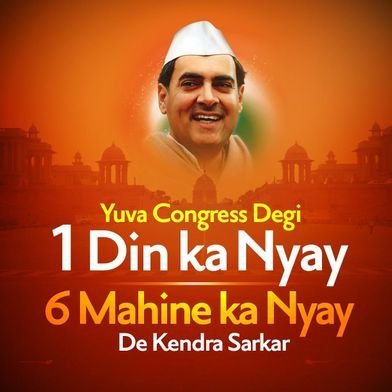 New Delhi: The Indian Youth Congress (IYC) will distribute one-day wages to the underprivileged on the death anniversary of Prime Minister Rajiv Gandhi on Thursday.

“The lockdown has badly affected the migrant and the poor. To extend a helping hand and get them justice they deserve, the Congress will provide financial assistance to the underprivileged people and their families,” said IYC president B.V. Srinivas.

As per the NYAY, the IYC is demanding Rs 6,000 assistance per person for six months, along with doubling of MANREGA benefits to the worst-hit.

The IYC said from the day one of the lockdown, Congress leader Rahul Gandhi had been asking the government to help all those people, who were in the urgent need of financial support.

“This day has been chosen to commemorate Rajiv Gandhi’s ideology of equality and remember the contributions and sacrifices he made for this great nation of ours,” said Amrish Ranjan Pandey, IYC media in-charge.

This concept was the part of the NYAY, advocated by Rahul Gandhi as an effective plan to help the underprivileged. (IANS)