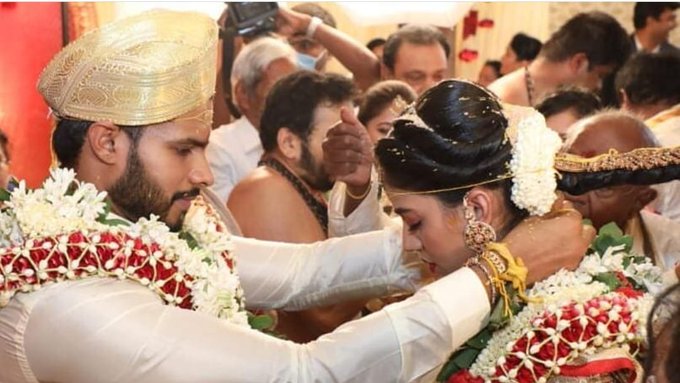 Bengaluru: The wedding of former Chief Minister H.D. Kumaraswamy’s son Nikhil Gowda with Revathi at a farmhouse near Bidadi in Karnataka’s Ramangara district on Friday sparked a row over alleged violation of lockdown norms.

Taking objection to non-observance of social distancing by the attendees who didn’t wear face masks, Deputy Chief Minister C.N. Ashwath Narayan told reporters here that he had asked the district’s Deputy Commissioner and Superintendent of Police to inquire into the charge that lockdown guidelines were violated.

“Permission was given for the wedding but with guidelines to maintain social distancing and wearing of face masks by all those attending the ceremony. If there is a violation, action will be taken,” Narayan said.

The farmhouse is 3km from Bidadi and 45km southwest of Bengaluru in the southern state.

Kumaraswamy’s spokesman K.C. Sadananda, however, told IANS that the guidelines were not violated, as the ceremony was held within the house and only family members and close relatives were present on the occasion.

“As the main ceremony — tying the nuptial knots — was held in the marriage pandal, only family members were present, while relatives were seated in the farmhouse at a distance,” the spokesman said.

The spokesman also clarified that the district (Ramanagara) was a green spot with not a single coronavirus case reported till date, unlike in Bengaluru which is a coronavirus hotspot with over 80 positive cases so far.

Nikhil, 28, got engaged to Revathi, 22, a grandniece of state Congress leader M. Krishnappa, in Bengaluru on February 10.

“About 100 people attended the ceremony conducted according to Hindu rites by priests in the presence of the couple’s parents, other family members and relatives,” said Sadananda.