Sea of migrants in Mumbai demand to return home 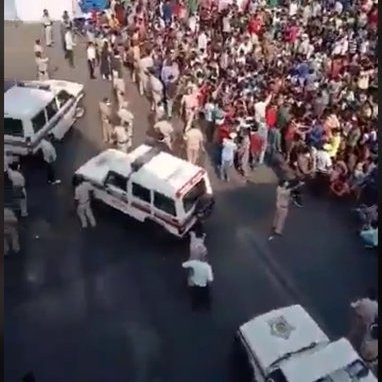 Mumbai: Social distancing went for a toss when over 3,000 stranded, hungry and angry migrants from different parts of India thronged near the Bandra railway station on Tuesday demanding that they should be given transportation to return to their native places immediately.

The Mumbai Police, which attempted to cajole them from jamming there in such large numbers, resorted to a mild lathi charge when sections of the restive hordes threatened to go out of control.

By 6 p.m., Mumbai Police spokesperson and Deputy Commissioner of Police Pranaya Ashok informed that “the crowd had dispersed” while local police sources said that the “situation is under control, and the entire area would be sanitised” as a precautionary measure.

The gathering — violating strict prohibitory orders enforced throughout the state — took place barely a couple of km from ï¿½Matoshri’, the private residence of Chief Minister Uddhav Thackeray. The incident has sparked a political row.

Coming in trickles, the jostling sea of humanity, including women, virtually caught the police unaware and sounded alarm bells among the state health authorities struggling to keep people indoors and avoid crowding in view of the Covid-19 pandemic.

Though the reasons for the sudden crowding were not clear, there were some rumours of food packets to be distributed by local groups and of some long-distance trains being started from Bandra on Tuesday night.

Several of the migrants heatedly demanded that they could not continue to live in Mumbai, away from their homes or families in different parts of India with the lockdown getting extended till May 3 following the announcement made by Prime Minister Narendra Modi on Tuesday morning.

They asked the police to make arrangements for suitable transportation facilities to enable them to go to their respective towns and villages. Congress MLA Zeeshan Siddique tried to calm them down, appealed to them to disperse and promised to take up their issue.