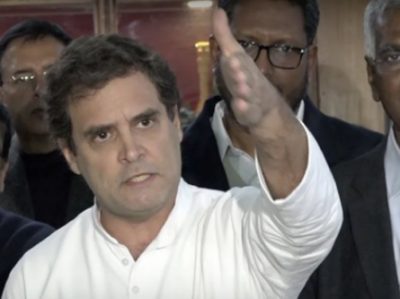 New Delhi, Feb 7 (IANS) Following a brief altercation between Congress and BJP MPs inside the Lok Sabha on Friday, former Congress President Rahul Gandhi alleged that his voice is being suppressed in the House.

Gandhi is in the middle of the Friday row inside the House as MPs from treasury benches clashed with opposition over the former Congress chief’s “danda” remark against the Prime Minister.

Gandhi alleged that there were instructions from BJP heirarchy to stiffle his voice in the House.

The incident happened when Congress MP Manickam Tagore tried to snatch away a paper being read out by Union Health Minister Harsh Vardhan.

Reacting on the episode Rahul Gandhi defended Manickam Tagore and alleged that Tagore was roughed up and claimed that the oppposition and the Congress were “being sidelined”.

After the incident Rahul Gandhi spoke to the media and said: “There is a issue in Wayanad about them not having Medical College this is long standing issue so I wanted to raise this issue in the House.

“However, the BJP doesn’t want me to speak in the House so and in a completely un-parliamentary manner the Health Minister raised an issue which happened outside the House and has no business here in Parliament.”

The Government has alleged that after Rahul Gandhi’s instigation, the Congress MPs thought they will live up to their leader’s ‘danda’ comment. This was an attempt to manhandle Dr Harshvardhan. This shows the frustration level of Congress and is height of gundaism,” said Parliamentary Affairs Minister Pralhad Joshi.