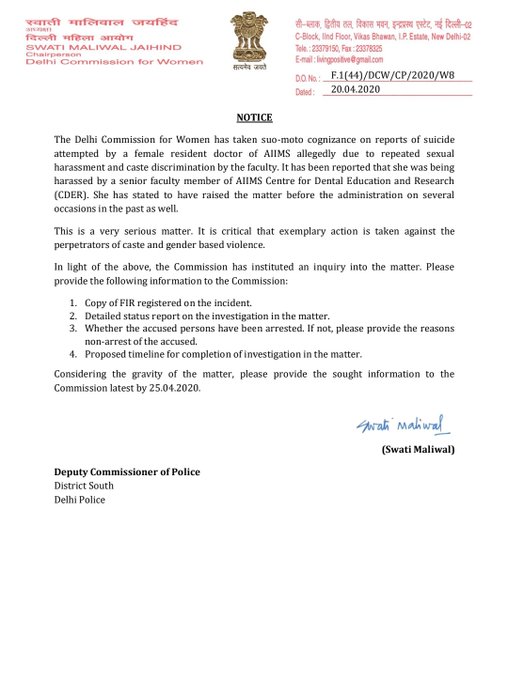 New Delhi: The Delhi Commission for Women (DCW) has issued a notice to the Delhi Police and the All India Institute of Medical Sciences (AIIMS) over the alleged suicide attempt by a female resident doctor of AIIMS.

The doctor attempted to commit suicide on Friday due to alleged sexual harassment and caste discrimination. She is undergoing treatment at AIIMS currently.

In its notice to the Delhi Police, the commission asked the law enforcement agency to submit a detailed status report of the investigation by April 25 and also provide a timeline by which the police will conclude its probe into the case.

In its notice to the hospital, the commission asked the authorities to submit the copies of the complaints made by the victim, and provide a detailed action taken report on complaints.

The Resident Doctors’ Association of AIIMS had on Sunday written to Union Health Minister Harsh Vardhan over the caste and gender-based harassment of the doctor at the institute.

Earlier in the day, the National Commission for Women (NCW) too took cognizance of the alleged suicide attempt by the lady doctor.

The NCW wrote to Health Secretary Preeti Sudan, stating that the commission has taken cognizance of the incident. It asked for an immediate inquiry and sought details of the action being taken in the case, and said the report should be sent at the earliest to the commission.

“The National Commission for Women is concerned in the matter, and requests that inquiry should be done in the alleged harassment case, and action be taken to prevent recurrence of such incidents in future. Further, measures should be taken to ensure safety and security of women staff and doctors in all AIIMS departments,” the NCW said.