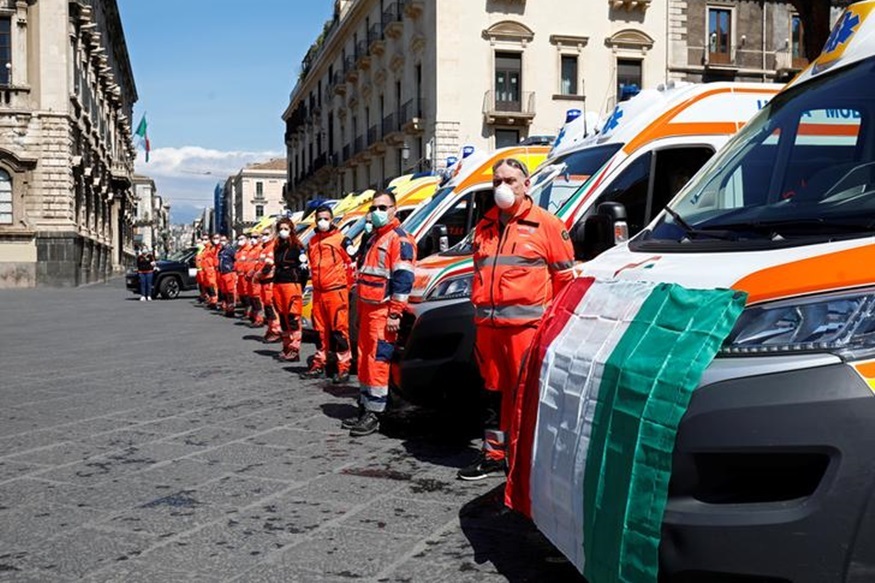 Rome: Italy observed a minute of silence for the victims of the coronavirus pandemic as their numbers rose above 12,000.

The death toll on Tuesday was 837, raising the tally to 12,428 since the pandemic first broke out in northern Italy on Feb. 21.

National Institute of Health (ISS) President Silvio Brusaferro said at a press conference earlier in the day that the upward curve of the rate of the pandemic seems to be leveling off.

“It appears we are reaching a kind of plateau, which means our (isolation and containment) measures are working,” Brusaferro said in reference to an ongoing national lockdown and strict quarantine measures.

“Reaching the plateau does not mean we’ve conquered the peak and the fight is over, but that we must begin the descent,” Brusaferro continued. “And the descent can begin if we continue paying maximum attention to how we behave and what we do on a daily basis.”

Flags flew at half-mast throughout the country as Italian President Sergio Mattarella, the cabinet led by Prime Minister Giuseppe Conte, both houses of Parliament, mayors from north to south, public broadcaster RAI, and the Vatican observed a minute of silence at 12:00 noon on Tuesday, mourning the victims and showing solidarity with doctors and nurses fighting the pandemic.

The move was initiated by the National Association of Italian Municipalities (ANCI).

“The participation of all the institutions that adhered to ANCI’s initiative … shows that Italy is united and supportive right now,” said ANCI President Antonio Decaro, who is also the mayor of the southern city of Bari.

On the international front, Italian Foreign Minister Luigi Di Maio thanked U.S. President Donald Trump for announcing that he will send “100 million U.S. dollars’ worth of medical supplies” to Italy.

“In spite of being among the countries most stricken by the coronavirus, the United States has shown great solidarity and generosity towards Italy,” Di Maio wrote on Facebook.

Also on Tuesday, the Civil Protection Department made known that over the past week, Russia has sent 14 military planes to Italy with 60 tonnes of medical equipment as well as doctors, nurses, virologists, anesthesiologists, sanitation experts, and interpreters.

Also on Tuesday, the General Confederation of Italian Industry (Confindustria) said in a report on the Italian economy in 2020-2021 that the pandemic has caused “a joint shock in terms of both supply and demand … therefore the economic outlook … is gravely compromised.”

Even if Italy’s manufacturing sector becomes 100 percent operational by the end of June this year “gross domestic product (GDP) will fall by an estimated 10 percent in the second quarter (of this year) compared to 2019,” Confindustria analysts warned.