Davinder Singh was arrested on Saturday along with Hizbul Mujahideen commander Naveed Babu, his acomplice Rafi and a lawyer named Irfan from a car on the highway near Kulgam. He was allegedly helping Babu travel to Pakistan in connivance with Irfan.

Arms and ammunition were later recovered from multiple raids conducted at the residences of Davinder in Srinagar. The disgraced DIG is currently being interrogated by a joint team of the Centre and J&K.

“DSP Davinder Singh sheltered three terrorists with blood on their hands at his home & was caught ferrying them to Delhi. He must be tried by a fast-track court within 6 months & if guilty, given the harshest possible sentence for treason,” Rahul Gandhi tweeted.

Congress General Secretary Priyanka Gandhi also criticised the government on the same matter. “DSP Davindar Singh’s arrest in JK raises disturbing questions critical to India’s national security. It seems rather odd that he not only evaded detection but was entrusted with extremely sensitive duties like escorting foreign envoys to J&K under the prevailing circumstances,” tweeted Priyanka Gandhi. 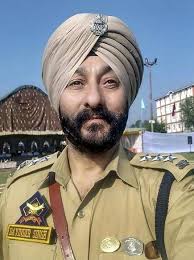