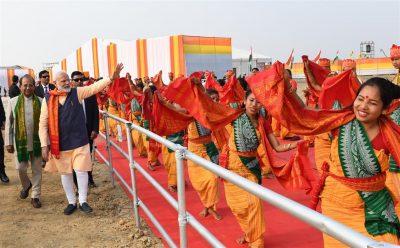 Kokrajhar (Assam), Feb 7 (IANS) Saying that development was the first and last priority after the signing of the historic Bodo accord, Prime Minister Narendra Modi on Friday asked the people of Assam to have faith in him and promised to do everything possible to fulfil their hopes, aspirations and expectations.

The Prime Minister, who was addressing a celebration ceremony of the recently-signed third Bodo peace accord, said the previous two agreements did not lead to lasting peace.

“Lasting peace was not established after the previous accords in 1993 and 2003. Now the Centre, state and all Bodo groups have committed to this historic accord. So now, development is our first and last priority,” Modi said while addressing the mammoth rally at Jangkritai Fwtar, about 216 km from Guwahati.

Modi told the euphoric crowd that he was their man.

“Friends, have faith in me. I am your man. I won’t be found wanting in whatever i can do to relieve your pain and suffering, and for fulfilling your hopes and aspirations, expectations and for a brght future of your children,” he said.

Modi’s Indian Air Force chopper arrived at a makeshift helipad here from Guwahati at around 12.45 p.m.

He was welcomed by hundreds of Bodo girls who performed the traditional ‘Bagurumba’ dance.

The state government earlier said it was expecting around four to five lakh people from the four Bodoland Territorial Area Districts (BTAD) – Kokrajhar, Udalguri, Chirang and Baksa – and other regions.

Kokrajhar had been decked up ahead of Modi’s trip with banners, festoons and big hoardings seemingly omnipresent to “thank” him for the peace accord.

On Thursday night, 70,000 earthen lamps were lit to enhance the celebratory mood. The Prime Minister shared the visual on his Instagram handle.

On January 27, the Centre and the Assam government inked a peace agreement with representatives of Bodo organisations, attempting to put an end to the decades-old Bodo insurgency based on the demand for carving out a separate state.

The tripartite agreement announced by Union Home Minister Amit Shah provides for the economic and political development of Bodos without affecting the territorial integrity of Assam.

The accord is the third Bodo peace agreement to be signed since 1993. The demand for a separate Bodoland is almost five decades old.

As part of the accord, altogether 1,615 cadres of the three factions of separatist organisation National Democratic Front of Bodoland laid down their arms before Chief Minister Sarbananda Sonowal last week. They deposited 178 arms and 4,893 pieces of ammunition.