Mehbooba, Abdullah to be freed: Priyanka 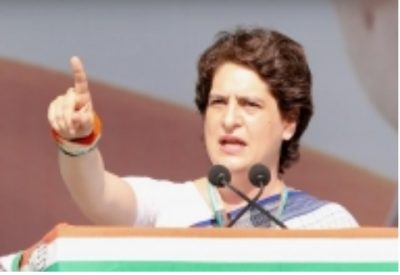 She also said the two leaders need to be “freed” and not “incarcerated” indefinitely without any basis.

“On what basis has the PSA been slapped on Omar Abdullah and Mehbooba Mufti? They upheld the Constitution of India, abided by the democratic process, stood up to separatists and never ascribed to violence and divisiveness,” Priyanka Gandhi said in a series of tweets.

“They deserve to be freed, not incarcerated indefinitely without any basis,” she added.

Her remarks came a day after the Jammu and Kashmir administration slapped PSA against four politicians, including Abdullah and Mufti, who completed six months of preventive detention on February 5.

Abdullah is currently detained at a Dogra-era palace Hari Niwas on Gupkar Road, while Mehbooba is detained at a government guest house at Lal Chowk.

Besides, three-time chief minister and parliamentarian from Srinagar, Farooq Abdullah, is also under detention under PSA.