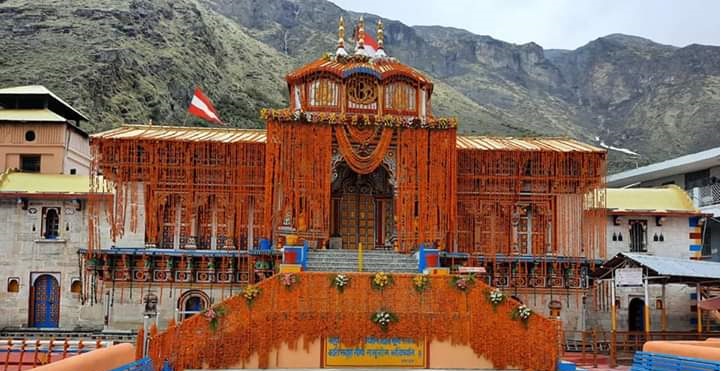 Chamoli (Uttarakhand): The gates of the Badrinath temple in Uttarakhand were opened at 4.30 a.m. on Friday and the first prayers to Lord Badri Vishal were performed on behalf of Prime Minister Narendra Modi.

During this time, a very limited number of people, including the chief priest were present there in keeping with the social distancing norms. This is for the first time in history, that devotees were not present at the dham when the gates were opened.

First, the gates of the Sinhdawar were opened amid chanting of the Vedic mantras. The key to the door lock was opened by the Devasthanam board chief. After this, the gates of the sanctum sanctorum were opened and the few people present there worshiped Lord Badri Vishal and prayed to liberate the world from the coronavirus soon.

As soon as the gates of the sanctum sanctorum were opened, Rawal Ishwari Prasad Namboodri entered. He removed the woollen blanket that was offered to God during the winter season. After this, Rawal bathed the Lord with holy water and performed a grand puja. The Dharmadhikari and the Additional Dharmadhikari Ved Pathi continued to chant the mantras during the process.

Harish Gaur, media in-charge of Uttarakhand Chardham Devasthanam Board, said the government advisory, including social distancing was followed in view of the corona lockdown. Masks were worn and cleanliness was taken care of.

He said, “After the opening of the doors, the sound of Veda mantras made Badrishpuri resonant and the temple was shining with electric lights with flower decorations. The Char Dham Yatra could not begin in view of the corona epidemic this year. Only the doors have been opened. Devasthanam Board had completed the preparations for opening of the valve.

District Magistrate Swati S. Bhadauria said: “The social distance in the Dham campus will be completely followed. Everyone must wear a mask. Instructions have been issued that priests arriving in the Dham till the lockdown period will not be allowed to go elsewhere from the Badrinath area without the permission of the administration.”