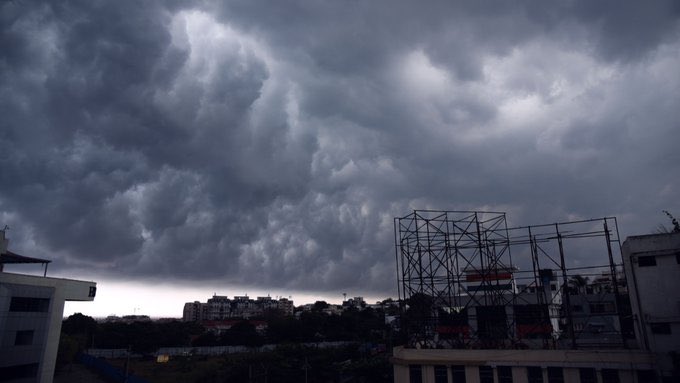 Kolkata: Cyclone Amphan, which has weakened from a super cyclone to an ‘extremely severe cyclonic storm’, is likely to make a landfall in Bengal between Wednesday afternoon and evening even as strong winds accompanied by heavy rain lashed different south Bengal districts since morning.

Amphan (pronounced UM-PUN) lay 155-km south-southeast of Paradip in Odisha, 177-km south of Digha and 260 km from West Bengal capital Kolkata. It has moved towards north-northeast with a speed of 22 km/hour during the past 6 hours.

According to MeT Department sources, Amphan will move towards north-northeast and pass through the West Bengal-Bangladesh coastline between Digha and Hatiya Island, located close to Sunderbans region, with a wind speed of 155-165 km/hour gusting to 185 km/hour.

Over 3 lakh people have already been evacuated from the coastal districts of West Bengal, including East Midnapore, South 24-Parganas, and North 24-Parganas.

Other south Bengal districts like West Midnapore, Howrah, Hooghly, and Kolkata will also experience heavy rain during the cyclonic spell — one of the worst storms over the Bay of Bengal since 1999.

West Bengal disaster management authorities are keeping a close watch on the situation. A control room has been opened at the state Secretariat Nabanno.

At least 12 NDRF teams have also been kept on stand-by as the cyclonic storm is likely to hit a large part of the coastal districts with “very heavy rainfall”.

Besides West Bengal, a warning has also been issued for Odisha, Sikkim, and Meghalaya till Thursday. (IANS)