Trinamool lashes out at Modi govt over migrant workers’ issue 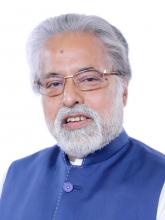 Kolkata: On the issue of home coming of hundreds of thousands of migrant workers from across the country, West Bengal’s ruling Trinamool Congress leaders on Wednesday hit out at the Narendra Modi-led Bharatiya Janata Party (BJP) government, saying the Centre had lacked in ‘far-sightedness’ at the time of announcing the Covid-19 lockdown.

Trinamool’s Lok Sabha leader Sudip Bandopadhyay told mediapersons through a video conference that the Central government should have made necessary arrangements for the migrant workers to get them back home right at the time of announcing of the lockdown.

“The Centre should have thought of it earlier when it had announced the first phase of lockdown in March. There was a serious lack in management. Now they have realised the crisis in the last leg of the ongoing third phase of lockdown. This is unfortunate,” Bandopadhyay said.

Trinamool Rajya Sabha member Derek O’Brien, who steered the video conference from the office of the All India Trinamool Congress (AITC) here, also criticised the Centre for not taking adequate action in bringing back the poor migrant workers settled across various states.

“I want to ask the heartless government at Centre what it was doing when these large number of poor migrant workers was hungry and not getting any ration. The government can spend so much of money on the visit of the US President, but it cannot ensure basic minimum security for these workers,” O’Brien said.

Another Trinamool MP from Barasat in North 24-Parganas, Kakoli Ghsoh Dastidar, who is also a doctor, said that the economy of the nation thrives on these migrant population as they leave behind their families in villages and work at various industrial units across India.

“It is quite deplorable that the government cannot take care of them at the time of crisis. The Centre had just imposed an unplanned lockdown upon its citizens. Now the Centre should think of an economic package for these migrant workers and chalk out a proper strategy,” Ghosh Dastidar said.

Trinamool’s criticism came two days after Congress President Sonia Gandhi had announced that her party would bear the railway fares of the home-bound migrant workers at a time when the Centre was drawing widespread flacks from all political corners.

Earlier, the Congress President had also said in a statement that if the government can bring back citizens stranded abroad by air free of cost, why can’t it take the same responsibility towards these poor migrant workers who have lost their livelihoods due to the Covid-19 crisis. (IANS)