While Dhoni wanted to be a goalkeeper, I had other plans: Gurpreet 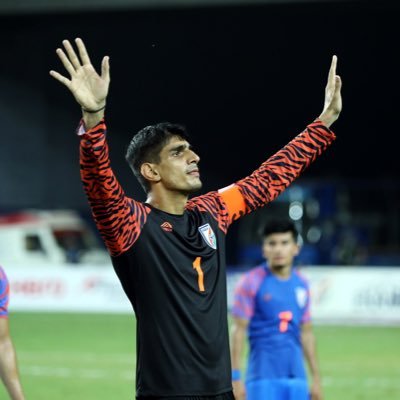 Kolkata: The resumption of sport, even if it is behind closed doors, could be a way where people start feeling a little better with some live matches on television, feels ace India goalkeeper Gurpreet Singh Sandhu.

The German Bundesliga is set to end the prolonged spell of no football on TV as it takes centre stage on Saturday amid the coronavirus pandemic which has sidelined the Premier League, Spain’s LaLiga and Serie A in Italy among other leagues in the world.

The matches will be played in front of empty stands but Gurpreet, the first Indian to play at the UEFA Europa League for Norwegian club Stabaek FC, feels even if closed door matches is the ‘new normal’, players have to respect that as a community for health and safety of all.

“We would love to have people in the stadium but at this point the safety of the people is important,” Gurpreet told IANS from Sydney.

Gurpreet has been in Australia since India announced a nationwide lockdown on March 25.

“So, if closed doors is what is required to keep everyone safe and step towards a new normal (so be it)…at this point, it is not safe for stadiums to have people in and I think sports can be a way where people can feel a bit normal in the way of living with some live games on TV,” said the Bengaluru FC custodian.

Gurpreet, who helped Bengaluru FC reach the semi-finals this season before they lost to eventual champions ATK over two legs, also revealed had joined a cricket academy in his hometown in Mohali as a kid and had trained for three-four days before finding his calling in football.

“I went there for 3-4 days as a kid. I didn’t fall in love with playing as the rush was not there. But since my father loves cricket, I did take the chance,” said Gurpreet who was then recruited by his school football team.

“While M.S. Dhoni wanted to be a goalkeeper, i had other plans as a kid,” the 28-year old also tweeted.

Gurpreet also congratulated defender Sandesh Jhingan and women’s team striker Bala Devi as they were nominated by the All India Football Federation (AIFF) for the Arjuna Award.

“It’s amazing news for both Sandesh and Bala. I am very happy for them. They truly deserve it for their outstanding achievements and wish them both well and good luck,” said the tall custodian who himself was awarded the Arjuna award in 2019.
(IANS)