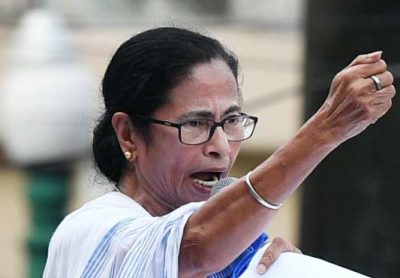 “What is this? Whenever there is election anywhere, they do this. They say everybody is a terrorist. Who are they then? The biggest nationalist? They are most opportunist,” Banerjee told mediapersons at the state secretariat Nabanna.

She said the BJP was incapable of delivering the good, either to the nation or to the people. “They are only talking like this to encourage vandalism, hoologanism and goondaism, which is not the path of Gandhi, or Netaji (Subhas Chandra Bose), or (Sardar Balalabhbhai (Patel) or (B.R.) Ambedkar”.

Attacking the AAP Chief Minister, Delhi BJP poll in-charge Javadekar said, “Kejriwal is making an innocent face & asking if he is a terrorist. You are a terrorist, there is plenty of proof for it. You yourself said you are an anarchist, there is not much of a difference between an anarchist and a terrorist.”

“I don’t like the way the nation is being run,” Banerjee said and added, she wouldn’t learn politics from the BJP leaders. “We learn our politics from the freedom movement, and from the movements organised prior to that.”

Stating that the February 8 Delhi vote will decide the fate of the country, Banerjee said urged the people to believe in people, rather than in those firing bullets.

“I will appeal to the BJP, don’t behave like this. Don’t play this dirty game. Only political speech, hate speech and vandalism is on. Otherwise, how constitutional post-holders are saying like this,” she said in an indirect reference to the slogan of firing at “traitors” raised at a poll rally addressed by BJP leader Anurag Thakur in Delhi.