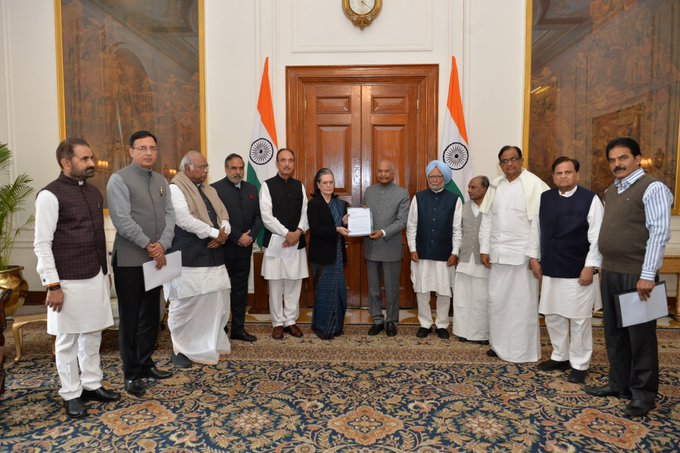 New Delhi, Feb 27 (IANS) A Congress delegation led by party interim chief Sonia Gandhi met the President Ram Nath Kovind and submitted a memorandum over the violence in Delhi. The party urged the President should intervene in the matter and sought the removal of Home Minister Amit Shah.

“Constitutional Office you hold, that the life, liberty and property of the citizens is preserved, secured and protected. We also reiterate that you should immediately call for the removal of the Home Minister given the gross ineptitude, abdication of duty and his inability to contain the situation.” said the memorandum.

The Congress delegation to the President said that he should direct the government, both central and the state, to act.

The Congress alleged that instead of taking active steps to remedy or diffuse the situation, the Central Government, as also the newly elected Delhi Government, have remained mute spectators as completely mindless rage, designed violence and organised looting of property, has continued unabated.

“Due to the complete inaction on the part of the Home Minister and the Central Government, the violence has claimed the lives of at least 34 people and over 200 have been injured at last count. Properties and businesses worth several crores have fallen prey to unchecked arson and looting.” said the memorandum.

The party raised question about the home Minister “where was the Home Minister and what was he preoccupied with since last Sunday that he was unable, apparently, to give his attention to these grave events? For that matter, the Delhi Chief Minister, and the newly elected Delhi Government was also completely missing from the scene.”

The party also raised the issue of intelligence failure. “There was clearly a shocking and, in this day and age, unpardonable failure of intelligence agencies leading up to these heart-breaking events.”