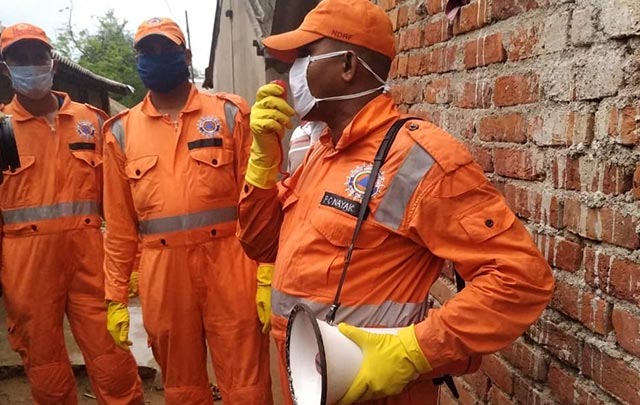 Bhubaneswar: Cyclone Amphan caused havoc in the coastal districts of Odisha as it triggered heavy rainfall, coupled with high-velocity winds while moving towards the West Bengal on Wednesday.

Hundreds of trees were uprooted and electric and telecom infrastructure damaged.

The government has received reports of two deaths from Bhadrak and Kendrapara districts due to the cyclone.

“We have received reports of a child’s death at Tihidi in the Bhadrak district. The District Collector has sent a team, comprising tehsildar, medical and police officials. The exact cause will be ascertained after autopsy,” said Special Relief Commissioner (SRC) Pradeep Jena.

A 67-year-old woman died in her house in the Satabhaya area of the Kendrapara district as ambulance didn’t reach her in time. An inquiry has been ordered to ascertain the cause of death, said the SRC.

A total of 1,48,486 people have been evacuated from low-laying areas, and thatched and mud houses, and accommodated in 2,921 cyclone shelters. Besides, 1,885 pregnant women were shifted to hospitals for better care in the last two days, said the SRC.

Thirty-six NDRF and ODRAF teams have been deployed in the coastal districts.

“Route clearing and restoration works have begun in the Jagatsinghpur, Kendrapada and Bhadrak districts. Mostly trees and electric poles have been uprooted at many places. Damage assessment has also begun,” said the SRC.

Energy Secretary Bishnupada Sethi said they had received reports about damage to electric infrastructure in the cyclone affected areas.

“As a precautionary measure, the department had pre-positioned manpower and electric equipment. Once the impact of the cyclone decreases, we will try to restore electricity supply,” said Sethi. (IANS)