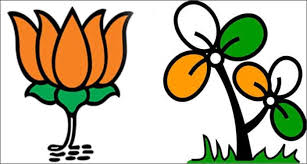 New Delhi: At a time when the country is locked in a grim fight against coronavirus, a political battle is raging between the BJP and the ruling Trinamool Congress in West Bengal. The situation has come to such a pass that BJPs Lok Sabha MP from Barrackpore Arjun Singh has accused the Mamata Banerjee government of hatching a conspiracy to eliminate him. On the other hand, Trinamool leaders have said that BJP is doing politics in this hour of crisis.

Political analyst Ratan Mani Lal says the political battle has become a question of prestige for the two sides.

The assembly polls are due in West Bengal next year, so the coronavirus pandemic is being seen as an excuse in the run-up to the preparations for the elections. BJP’s national General Secretary Kailash Vijayvargiya is in-charge of West Bengal and has adopted an aggressive stance: hardly a day passes without his acerbic barbs at the Banerjee government through tweets or by letters where he accuses the state government of being insensitive towards migrant workers.

The Amit Malviya-led IT Cell of the party has since March already dug in against the Trinamool government.

A tough fight looms in 2021
In the 2011 Assembly polls, Mamata Banerjee had dislodged the entrenched three-decade-old Leftists. In the intervening years, the BJP devoted itself to strengthening the organization. In 2016, the saffron party couldn’t do anything spectacular, but in 2019 Lok Sabha polls, it stunned all by winning 18 of the 42 parliamentary seats. The Trinamool could bag only four more than the BJP – 22 seats.

In 2014 polls, the Trinamool’s Lok Sabha tally was 34 out of 42 seats. The unprecedented Lok Sabha showing last year has led to unease in the Trinamool camp, triggering shifting of loyalties among Trinamool leaders. This restlessness continues in the Mamata camp.

On the other hand, the Lok Sabha performance has boosted the BJP morale, the feeling of bravado has given space to belief in the cadre that the party is within the striking distance of getting into power in 2021 polls — in the same manner as the Leftists were ousted in 2011 polls.

The BJP has come to acquire Number 2 position in the state politics, leaving behind the Congress and the Left. Analysts say the reducing distance in the race to be Number One between the Trinamool and BJP is the reason for intensification of conflict between the two parties, leading to a battle of political prestige.

BJP’s West Bengal unit’s Secretary Ritesh Tiwari told IANS that the Mamata Banerjee-led state has receded back into the days of Leftists. “Poverty and unemployment are on the rise and violence has become a routine. In the times of corona crisis, hospitals have neither treatment facilities nor has the government arranged adequate quarantine centres. The resentment among the people would surely express itself in the 2021 polls,” said Tiwari. (IANS)