Know how South Delhi is giving tough fight to coronavirus

New Delhi: While the national capital’s tally of coronavirus cases has crossed the 11,000 mark, the posh South District of the capital city has given a tough fight to the deadly virus.

The densely populated district, which was feared to become the biggest hub of cases, turned its fate with rigorous efforts in contact tracing and establishing coordination with the residents.

Out of 14 containment zones, which were initially created after a herd of cases appeared, more than half of these zones have now been de-contained and scaled down.

Speaking to IANS, B. M. Mishra, District Magistrate, South, said, “The containment was done on the basis of the spread of the virus. We had created 14 containment zones, out of which we have now scaled down more than half of these zones.”

Responding to how the rapid spreading of this virus has been controlled swiftly, he said that proper perimeter control of the containment zone was maintained. “We made sure that entry and exit points are sealed and ensured that no one enters or exits without proper scrutiny,” he said.

The next big step was an extensive survey of these zones which was made possible by the Civil Defence Volunteers (CDVs) and the mobile application. 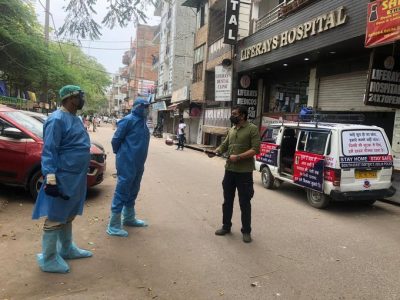 A survey of the containment zone is conducted first on the day when the zone is created, next it happens on the seventh day and then on the fourteenth day.

“In order to create a healthy and comfortable environment with the residents and to bring in coordination with them, we created WhatsApp groups to contact the people living in these zones. We not only kept enquiring and monitoring about their health, we also made sure the right supplies of essential goods to these people remains intact,” Mishra said.

When asked about the role of Contact Tracing in stopping the spread of this virus, he replied that whenever a person is tested positive, he is interviewed wherein it is inquired that which places he had gone to or travelled and the people he met in the last 14 days. This helps in building up the chain,” he said.

Following this the administration put the potential contacts (obtained through contact tracing) under strict home quarantine and monitored them through the Home Quarantine App.

He also informed that the district has converted its Sub Registrar, Mehrauli office into a state of the art Surveillance Hub, which carries out the procedure of tracking the potential patients and also manages the existing ones.

IANS had earlier visited this facility, which is engaged in tracing down the trail, involving a huge task and requires much effort and resources.

Sub Registrar Aneesh Yadav, who is the nodal officer for surveillance and is heading the Surveillance Hub in Delhi’s South District, while taking IANS through the process had said, “When we receive the information regarding a patient from anywhere here, hospital or labs, a team of doctors are rushed to their residence to shift the person to a hospital.

“Once the shifting is over and the patient is comfortable, we take the mobile number and track his or her routine for the past 14 days. Wherever the patient has visited, all those said areas are sanitized,” Yadav had said.

“Along with this, a medical surveillance team tracks and visits all those the patient likely came in touch with or interacted directly. Each of these contacts are screened to ascertain whether they are symptomatic or a symptomatic,” he said.

Explaining the working of the hub, Anuja Vasudeva, District Surveilance Officer and a doctor told IANS: “We perform two major jobs at this Hub — first, contact tracing of all positive COVID-19 patients and second, planning, survey and reporting of all the containment zones of the South District.

“Our team has seven Physical Therapy (PT) students coming from the Maulana Azad Medical College (MAMC) and two other doctors, and one doctor for the containment zone who does the planning with the staff of the District Magistrate and some data entry operators,” Vasudeva said.

“As soon as we receive the information, we start the tracking and tracing process on the phone immediately and all the high risk contacts are put on either home or institutional quarantine and we inform all the other needful to our counterparts at the DM office,” she added. (IANS)