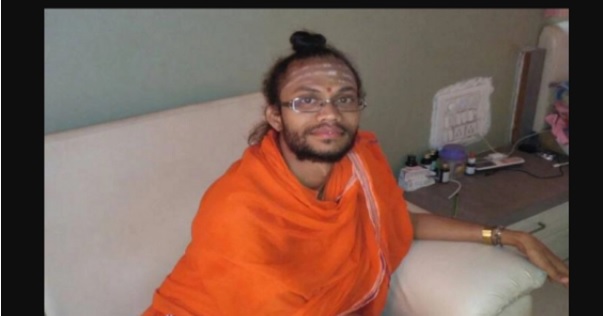 Nanded (Maharashtra): In a sensational incident, a sadhu was robbed and murdered in his bedroom at his ashram in Umri (Nanded), early on Sunday. Barely 12 hours after the incident, the prime suspect was caught, a top police officer said.

The sadhu had arrived from Karnataka to Nanded over a decade ago.

The sadhu, who was strangled to death, has been identified as Shivacharya Nirvanarudra Pashupatinath Maharaj, the founder-spiritual head of Nirvanji Pashupatinath Mutt.

He entered Shivaharya Maharaj’s bedroom where he was resting and threw chilli powder in his eyes, blinding him.

Then he quickly grabbed cash of Rs 69,000, his laptop and other valuables in the bedroom worth approximately Rs.1.50 lakh, besides the sadhu’s car keys.

As Shivacharya Maharaj attempted to grapple with him, Langote pinned him down and strangled him, then dragged his body to the sadhu’s car parked outside and dumped it into the boot.

“He started the car and sped off towards the road outside, but the car crashed into the main gate of the ashram creating a noise, alerting the other sevaks sleeping inside the ashram,” Magar said.

Around 8-10 other ashram sevaks rushed outside to check the ruckus and when they saw their seer’s belongings and his body in the car trunck, they attempted to stop Langote, but he gave them the slip.

A short distance away, Langote managed to steal a motorbike and sped off into the darkness and hours later, the police found the body of his accomplice Shinde from a nearby school premises, Magar said.

In view of the sensitivity of the incident, Magar said around five crack teams were formed which fanned out into the district and managed to catch Langote this afternoon.

“The prima facie motive for the Sadhu’s murder was clearly robbery and the second killing could be due to rivalry or some differences among them. The absconder suspect has been caught by a police team. We will interrogate him and get further details of the crime,” Magar told IANS.

Nanded Congress strongman and PWD Minister Ashok Chavan appealed that the murder should not be politicized, since the police investigations are underway and the autopsy report is awaited.

Shivacharya Maharaj had come to Nanded over a decade ago and set up the ashram which he ran along with a band of followers. (IANS)