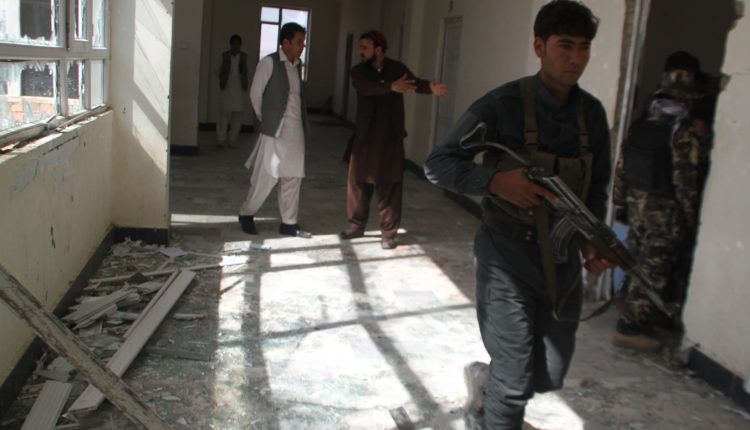 Kabul: At least nine people were killed and around 40 injured on Monday in a Taliban suicide attack near a security base in Afghanistan’s Ghazni province, officials said..

“Taliban terrorists today morning, in a series of their crimes in this holy month of Ramadan, carried out a truck bombing against the Islamic Cultural Centre in Ghazni city (situated next to the military base), in which nine persons were killed,” Interior Ministry spokesperson Tariq Arian said in a statement.

According to a statement by the Ghazni governor’s office, the attacker detonated a stolen explosives-laden truck near the base of the National Directorate of Security – the country’s main intelligence agency – at around 4.40 a.m.

An aide to the governor confirmed to Efe news that nearly all of the casualties were security forces members.

Eight of those injured were in a critical condition while the rest were stable.

The impact of the “powerful blast” shattered window panes of houses even as far as 2 km from the attack site.

In a statement, the Taliban said “tens” of security forces members were killed and injured in the attack.

In this attack, “tens of security personnel of the stooge enemy were killed and injured, while several of their military vehicles also destroyed”, Taliban spokesperson Zabihullah Mujahid said in the statement.

Mujahid claimed the attack was a part of a fresh campaign in response to “offensive operations” carried out by the security forces on the orders of President Ashraf Ghani.

Last week, Ghani ordered Afghan forces to end their defensive posture and go on the offensive against militants, after 56 civilians were killed in two separate attacks by insurgents in Kabul and Nangarhar province.

The government had blamed the Taliban for the incidents, but the group denied any involvement.

Moreover, the latest suicide attack comes a day after Ghani and Abdullah Abdullah, the runner-up in last September’s presidential elections, reached an agreement to end months of stalemate over the outcome of the polls.

The deal, whose details were yet to be revealed, was struck after Ghani suggested Abdullah should lead peace negotiations with the Taliban, aimed at ending a two-decade old war.

The political crisis sparked fears that the intra-Afghan peace process could fail even after a historic deal was reached on February 29 between the US and the Taliban, guaranteeing the departure of foreign troops from the country within 14 months. (IANS)