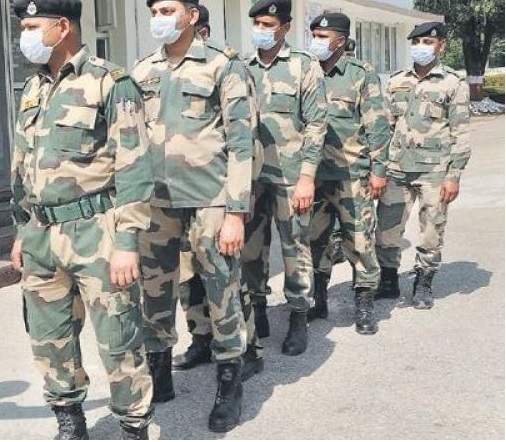 Agartala: Even as 54 Border Security Force (BSF) men and eight family members in Tripura have tested coronavirus positive in the last five days, authorities are yet to identify the source of infection though they are working to ensure no further spread of the virus among the troopers.

“We are working round-the-clock to prevent further spread of the disease and to identify the primary and secondary sources of infection,” BSF’s Tripura Frontier Deputy Inspector General C.L. Belwa told IANS.

Top BSF officials, including 138 Battalion BSF Commandant J.K. Singh, are taking action on a war-footing to identify the primary source of the dreaded disease.

The BSF authorities are also making ready their hospital at the Tripura frontier headquarters at Shalbagan, near here, to treat infected BSF personnel.

Education and Law Minister Ratal Lal Nath told IANS that the state through Principal Secretary (Home) Barun Kumar Sahu had written to the BSF IG for the report along with details of the source of corona infection.

Nath, who is also the Tripura Government Spokesman, said that so far 366 persons, including 80 doctors and health workers and 286 BSF jawans, had been identified for directly or indirectly coming in contact with the infected BSF troopers.

After a woman and a Tripura State Rifles (TSR) jawan were cured and discharged from hospital, the northeastern state was declared coronavirus free on April 25.

However, two BSF jawans — including a Head Constable — tested positive on May 2 at the 138 Battalion. Till late Wednesday night, the active corona cases were 62, including two women (wife and relative of the jawans), their five children and a mess worker.

Former BSF Tripura Frontier DIG Samir Kumar Mitra told IANS on phone from Kolkata that authorities must undertake a massive campaign to make both BSF men and border residents about prevention of coronavirus.

“The BSF troopers while patrolling must use hand sanitizers, face masks and other protective gears as they come in close contact with infiltrators from across the borders and Indian villagers staying on international borders,” the former BSF official said. (IANS)