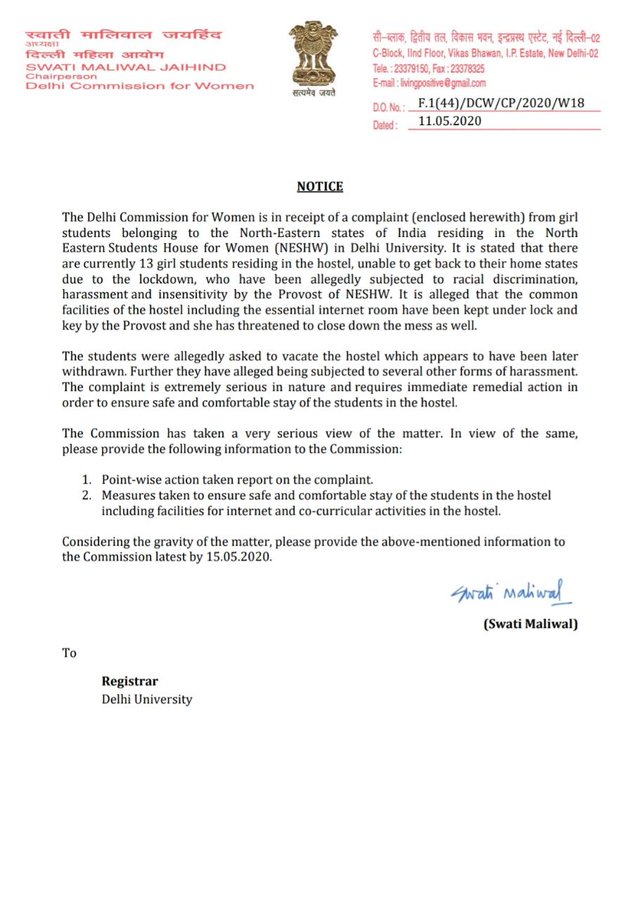 New Delhi: The Delhi Commission for Women (DCW) on Monday issued a notice to the Registrar of Delhi University after female students from northeast India alleged that they were forced to vacate hostels and were facing racial discrimination.

The students complained to the DCW alleging that the university administration was putting pressure on them to vacate the hostel, the DCW said in a statement.

“It is learnt that taking cognizance of the matter a Union Minister had assured assistance, but on Monday a fresh complaint has been registered by the girl students to the Commission seeking intervention in the matter,” the DCW said.

In the complaint, the students alleged that they were told to vacate the hostel.

“They also complained about the food being served to them in the mess,” the DCW said.

The DCW said the students have also complained about racist remarks being made against them.

“Due to the lockdown, they have no choice but to stay in the hostel. The students have also complained to the Commission about racist comments being made against them,” DCW chief Swati Maliwal said.

Maliwal said that this was a very serious matter and in view of this, the commission has issued a notice to the university, asking it to immediately take action in the matter.

“Any such discrimination won’t be tolerated at all,” she said.

The notice to the university said that there are 13 girls staying in the North-Eastern Students House for Women in Delhi University.

“It is alleged that the common facilities of the hostel, including the essential internet room, have been kept under lock and key by the Provost and she has threatened to close down the mess as well,” Maliwal said in the notice.

She demanded a report by May 15 on the action taken on the complaint as well as the measures being taken to ensure safe and comfortable stay of the students in the hostel. (IANS)