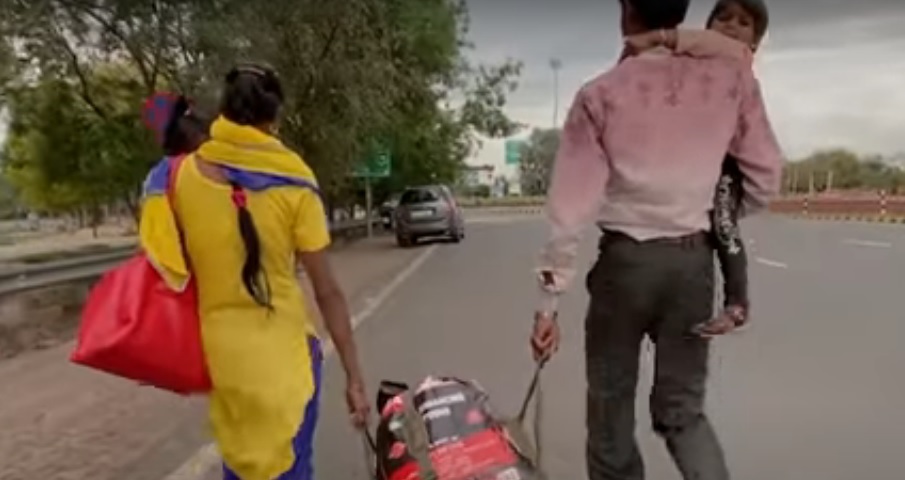 Jaipur: It was a tough trail for a 9-month pregnant woman who walked 196 kilometres on foot, from Ahmedabad with her husband, son (1-year-old) and daughter (2-year-old) for 6 days to reach her native place in Madhya Pradesh’s Ratlam.

Surprisingly, no one took pity on her condition throughout the way as she crossed district after district, checkpost after checkpost with an aim to reach her native place at the earliest.

However, it was her luck to get a few good samaritans at Dungarpur checkpost, who seeing her plight, stopped her and offered her food and transportation to help her reach her hometown.

Dungarpur SDM Rajeev Dwivedi told IANS, “This woman, with her family, including husband and two kids, reached Dungapur checkpost on Monday evening. The staff at the location was stunned to see her feeble condition as she looked quite tired and lacked energy. When asked if she had food, she simply refused. It also seemed as if she was in pain.”

The officials at the checkpoint hence informed the SDM and other officials. Soon a team of doctors from nearby medical checkpost arrived at the location to review her medical condition. It was evident that she was not in a condition to walk but had walked all along from Ahmedabad and hence they asked the family to rest overnight and offered them food and shelter, said Dwivedi.

Next was the task to get her e-pass done as she was going to another state.

“It being night, I directly informed the ADM Krishna Pal Singh Chauhan about the chain of events, then collected her details from checkpost and got her e-pass formalities done from my mobile,” Nayab Tehsildar Mayur Sharma made the report ready which was sent to district collector for further approval.

The administration, under emergency conditions, issued the pass. Once the pass challenge was resolved, they arranged an ambulance for her.

A nearby hospital came forward for help and offered their ambulance without charging a single penny.

“Dungarpur district administration has made all arrangements done to tackle such situations. If there are migrants reaching here after walking from far off locations, we have got mini bus and other modes of transportation available for them,” she said. (IANS) (Photo : Representative)