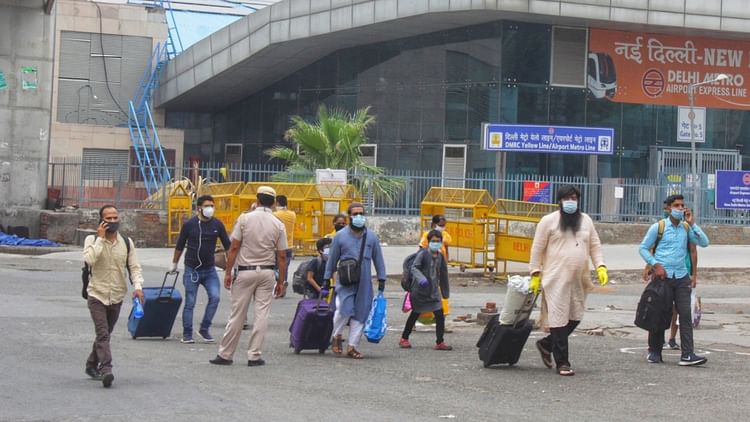 New Delhi: Shravan, a resident of Bihar’s Araria used to work as a labourer in a hotel in Delhi’s Paharganj area, and after the lockdown was announced to combat the spread of novel coronavirus (Covid-19) he went jobless.

But after the Indian Railways announced to start the partial train services from May 12, he has started earning at least Rs 500 on daily basis while working as a coolie outside the New Delhi railway station premises. Similar is the condition of several other youths from Nepal and other parts of Bihar and Uttar Pradesh, who have now got jobs outside the railway station in the last four days.

The Indian Railways has started to run 15 pairs of Special Rajdhani Express to ferry the passengers across the country. Speaking to IANS, Shravan said, “I used to work a helper in a hotel here, but after lockdown was announced all the hotels were asked to shut their operations. Following the shutting of the operation of the hotels, we went jobless,” he said.

He further said that the hotel owner, however, allowed him to stay in the servant quarters but they were dependent on food provided by the Delhi government outside the New Delhi railway station. “So when the train services resumed, we came out and started helping the people looking for coolie service outside the station to carry their luggage,” he said.

Shravan further said that in the last four days he has eanred over Rs 2,000 by carrying the luggage of the passengers arriving at the railway station to board the trains. Another hotel worker said that as no vehicles are allowed near the railway station, many passengers who are travelling with their children and parents are finding it tough to carry their luggage on their own.

Sunil Kushwaha, who hails from UP’s Azamgarh and also worked as a worker at a hotel said that by looking at the people going back to their homes, “I too feel like going back”.

“But I am working these days and earning some money before I go back,” he said. A senior Northern Railway official said that the coolie service has been allowed inside the station premises and over 75 coolies are present in the New Delhi railway station to carry the luggage of passengers.

The government has announced the nationwide lockdown on March 25 to combat the spread of Covid-19 and since then it has been extended twice till May 17. (IANS)