New Delhi: It was music to the ears of athletes when the government decided to allow sportspersons to start training on Sunday under Lockdown 4.0 and sprinter Dutee Chand is no different. After spending the last couple of months inside the four walls of her home, the Asian Games 100m silver medalist is back where she belongs — the track at the Kalinga Stadium in Bhubaneswar. But the sprinter believes a lot has changed in the last couple of months.

Speaking to IANS, Dutee not only spoke about returning to the tracks, but also highlighted how there is a sense of caution everywhere. She says that everyone wants to be alert and not commit a mistake.

“Earlier everyone used to greet each other but now even the security guards are a bit scared. Whenever we touched something, they asked us to wash our hands. Never saw the gym getting cleaned so many times previously but now, they were constantly sanitizing it,” Dutee revealed.

Not just at the stadium but Dutee can feel changes in her body as well which has been a result of sitting at home without any proper training. 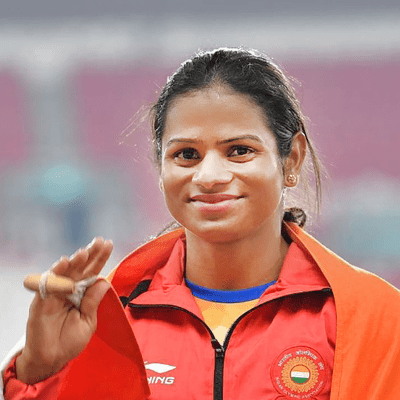 “I did my warm-ups but I faced some difficulties. Earlier I used to take five minutes to complete a kilometre during warm-ups, now it took me seven minutes,” she said.

“I did my practice and then came home. Earlier, we used to train in teams and we used to motivate each other but now, I had to do everything alone and it didn’t feel good.”

Before coronavirus hit the world hard, Dutee was focussing to bring her speed down to 11.15s, which is the Olympics qualification mark in 100m. She clocked 11.22s in Ranchi and became the fastest Indian but still was a fair distance away from securing an Olympic berth.

“I was preparing for the Olympics but then it was announced that due to the pandemic the entire country is going under lockdown,” she said.

“During that time I had gone to Patiala to take part in a tournament but it was cancelled. We weren’t even allowed to go on the ground and I was confined in my room. During the initial days it was very problematic for me.”

It was a mixed feeling for Dutee when Tokyo Olympics was finally moved to 2021. She revealed taking a big financial hit because of the postponement and also how she will have to do it all over again to reach the place where she was before coronavirus came into existence.

“When the Olympics got postponed I felt sad as I had prepared really hard for it. Financially also I took a hit as I had invested around 30 lakhs on my training from October to February,” Dutee said.

“I had plans to go Germany to prepare for the Olympics — three months training and then the competition. But because of coronavirus I had to cancel all such plans. I will have to start my training from scratch now,” she added.

Now the long road to recovery begins for Dutee and according to her, it is not going to be an easy ride. To regain her speed she will have to get back to full fitness first and that will take some time.

“It will take me three months to get back to full fitness. When I will start feeling fit then will focus on getting back my speed. I feel the speed that I touched in 2019, I will be able to regain than only in February 2021,” she said. (IANS)